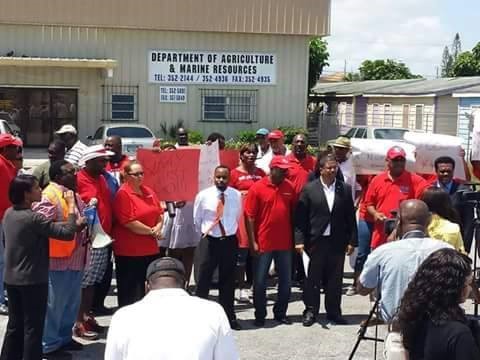 Last week, we thought that a clear and compelling case was made for the bias at worst and at best lack of balance by the media in The Bahamas.  Candia Dames of the Nassau Guardian leads the way, having replaced John Marquis as the leader in that Department.  She took a quote from Perry Christie and twisted it to mean something that it did not.  In that she had help from the trashy headline writers of The Tribune.  We would not go over that old ground again this week were it not for another glaring example of the inability of the press of The Bahamas to treat the PLP fairly and not to respond to their feelings of bias.

On Tuesday 7th April, the Free National Movement’s Chairman Michael Pintard announced that it had what he called another example of abuse of power.  They said that the Consul General Randy Rolle to the city of Atlanta had been arrested in Bimini and he had called the Prime Minister and he had arranged the man’s release.  The press ran with the story.   Mr. Rolle quickly issued a statement saying that no such thing of the PM calling anyone occurred.  Yet the press ran a story quoting the FNM calling for an explanation from the Prime Minister for something about which he knew nothing and in which he had no part.

The FNM and the press are so anxious to spin this narrative that the PLP abuses power that they were busy in their continued death by a thousand cuts strategy trying to link this with the case of Alfred Gray, the Minister, whose conduct is now being investigated by the police as to whether he interfered with the judicial process when he spoke to a local government administrator qua magistrate.  Mr. Gray denies doing anything wrong and was in the press twice last week saying that he would have the last say and that he expects to be vindicated.

Unfortunately last week, the press was able to build on comments by the public officials who were the subject matters of the stories to keep the stories more alive than they should have been.  This is a time to remind both of them of the biblical injunction that there is a time for silence and a time to speak.  This is no time for the PLP to be shooting itself in the foot.  This requires discipline and yes silence.  There is no better way to put it.

Within days of the faux pas by Michael Pintard, the Prime Minister issued a statement saying that he would sue Mr. Pintard and media houses that printed Mr. Pintard’s version of the story.  The great laugh of the week though was when the press called Hubert Minnis for a comment on the Pintard story, the cat suddenly got his tongue and  suddenly he then said it’s a legal matter and so he has no comment.  You will remember that he had no such problem when the Attorney General asked him to keep quiet as the investigation of the Gray matter unfolded.

Public figures have a responsibility to so conduct their public and private lives that they do not become an embarrassment to their party and the country.   We thought that expressions like “do you know who I am” had been banished to the dark ages.  No public official in a PLP administration should be making that statement.   It is simply foolish and no argument with a law enforcement official to the point where it becomes an embarrassment for the country is necessary.

There is the public interest in that.  At the same time, law enforcement officials have to exercise good judgment in matters involving public officials.  Once they carry out an act, they should be sure that it falls squarely within an act which is strictly necessary.  Too often it seems that public officials are deliberately obstructed simply to create embarrassment and then the next thing the press is brought in.   Fortunately in this case, the discretion was exercised to end the matter at the level of Bimini and the Assistant Superintendent of Police. The Commissioner of Police confirmed that he had no role in it and no politician was involved.  That is a good thing.

The Ministry of Foreign Affairs announced that Mr. Rolle is back in Nassau for consultations.  There the matter should end.

As for the press and Ms. Dames and her colleagues.  There is little hope that their anti PLP crusade will stop but we hope that should as we expect the Prime Minister win his case against them that they will pay through their noses and this will be a curb as on their behavior.