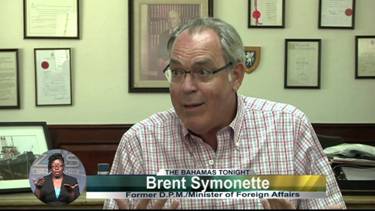 “Can a white man become Prime Minister of The Bahamas?

viagra sales no rx times;”>Yes, there he can; just not that white man.”

In the early days of last week Brent Symonette, who is the former Deputy Prime Minister and now a spokesman on everything, after spending a decade in politics doing nothing except making money, reared his head to say to The Tribune that the comments of the Foreign Minister Fred Mitchell made in Exuma on 8th July and reported in this space last week about Sarkis Izmirlian and his ill-fated investment in The Bahamas were “inappropriate”.  The truth is Brent Symonette is trying to make a comeback in politics.  He has this belief that one day he will succeed his father to being the Head of Government.  We don’t think he has his father’s skills or intelligence.  He doesn’t understand Black people either.  This is a fellow who went to St Andrew’s School which was invented at the time to ensure that no Blacks would have to mix with Bahamian whites.  That barrier was not broken until 1968.  He received a segregated education.  Really the language was far too polite in responding to him.  Brent Symonette should fuck off to Essex and get lost.  Well Fred Mitchell responded more politely by a statement to the press and here is what he had to say:

In Monday’s edition of the Tribune, it was reported that former Deputy Prime Minister Brent Symonette was giving me advice on what was appropriate to say in public. I penned a reply but it did not specifically address Mr. Symonette because the reporter never indicated who delivered the remarks but attributed the remarks to the FNM.

I now address Mr. Symonette specifically and in the interest of fairness and balance, I wish the Tribune would faithfully report what I say.

I thank Brent Symonette to keep his advice to himself. The day I take advice from him is the day pigs grow wings. He is in no position to tell me about appropriateness. When he left office as a Cabinet Minister, he was richer than when he became one. He was asked to step down as Airport Authority Chairman because a firm he owned was awarded a contract while Brent sat as Chairman. While he was a Minister, firms that he owned were awarded contracts from the government yet he wants to lecture me about what is appropriate.

I have told him before that I do not owe any money to Commonwealth Bank.
I implore him once again to go hide under the rock from whence he came.