A HEART TO HEART AT A PLP BRANCH MEETING 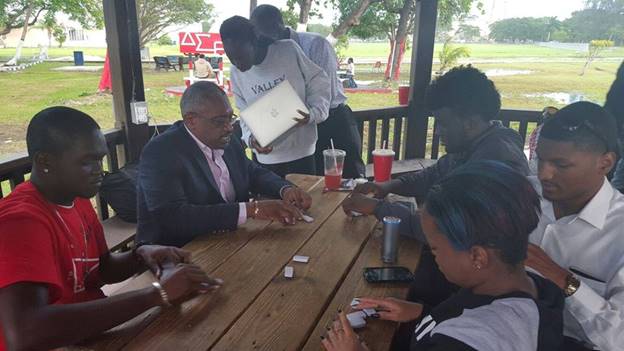 The last branch meeting held in Fox Hill by the PLP on 18 November, Fred Mitchell, their MP, told them a story.  He said that in February 2007, he knew that the PLP would lose the next election to be held that May.  One evening that February, he quietly moved out of his Government office and took all his stuff to his private office and the rest went home.  He said nothing but continued working in Fox Hill to try and win the seat.  He said it was quite unusual to be sitting in a position, knowing that a train wreck was coming and he could do nothing to stop it.  Perhaps, he didn’t speak English properly, maybe he spoke Greek but whatever he said or did, did not matter.  The train kept running.

He said he remembered the feeling of loss.  It was an empty feeling trying comfort those around him. He remembered how his first campaign manager cried because they had lost.  He remembered trying to get to sleep around 1 a. m. in 2007 and the FNM supporters out in the streets blowing their horns in celebration, and he thought that the devil was actually amuck. Life fear was running wild in the land.

He said that in 2007, the FNM set up 25 lawyers the next day with their entire leadership showing at the St Augustine’s St Mary’s Hall to see if they could steal those 64 votes he had won by away from him.  The vote did not change one bit.

Who did he thank for that night of victory?  He said there were people in the centre of Fox Hill who stood with him and they defeated the FNM candidate despite all the money and promises two to one. They deserved all the honour and all the praise.

This is now 2015.  What is he to do this time?  The PLP is likely to give him the nomination again.  But the question again is where the train is going.  Lot of talk about what we ought to do, but in the meantime, we appear mired down in endless bureaucracy.

Last week, Hubert Minnis went at our base, the students at the College of The Bahamas.  He met a portly Ian Strachan, a professor, who is his supporter who shepherded him no doubt through the complex.  Where are the PLPs?  Are we all secure on our smart phones and what’s app text messages, arguing amongst ourselves? Well maybe, just maybe the ground is shifting.

Mr. Mitchell told the branch that the PLP will have the toughest fight of its life in the next election.  Things will require the PLP to work harder than they ever had but the PLP deserves another term to finish what it has started, and to get our house in order and our national ethos on even keel.  That is why he will continue to fight despite the current vicissitudes but someone has to start listening and soon.

At the start of the term, Mr. Mitchell told the House “ I do not intend to spend the next term in Opposition when I will retire.”  Does he now have to rethink that statement?