A Writer On Line Questions The FNM’s Integrity 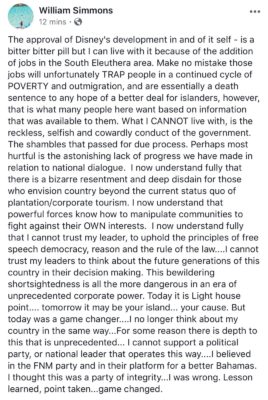 The Tribune’s editorial of Friday 19th October wants to have its cake and eat it to with regard the FNM administration and Hubert Minnis.  Having campaigned for the FNM (they lied in the editorial and said they were objective), they now find that they are the victims of their own lies. They find that Hubert Minnis is incompetent as Prime Minister.  He has no idea what he or his government ought to do.  The Tribune in the editorial listed one misstep after the next but hopes that in making the decision about what is to happen in South Eleuthera with the proposed Disney Project there, that there would not be another misstep.  That would be like asking a leopard to change its spots.  It cannot happen.  You have an individual and a government that simply is out of his depth.

We reprint the editorial below:

In these columns two weeks ago, we took the Prime Minister to task for various failings in relation to the governance of this country. As a newspaper, we have always sought to remain measured and objective in commenting on political issues, criticising a government where we consider it necessary but without favouring one party over another despite being accused sometimes of an anti-PLP stance.

Despite our commitment to remain unbiased, we nonetheless applauded the FNM’s overwhelming victory at the 2017 election because it had become clear a fresh approach was needed in Bahamian politics, with new faces at the helm after five years of the PLP government’s corruption and mismanagement.

It is against this background that, in company with many others who express their views privately, we are genuinely disappointed and concerned about the current performance of the FNM government under Dr Minnis’s leadership.

Over the last 18 months, the examples of so-called missteps and dubious decision-making are too well documented to bear detailed repetition. From stories reaching our ears, some of the problems have arisen from a dictatorial attitude and poor judgement at the top and a disinclination to consult and listen and to accept the advice of others.

At times, Dr Minnis appears to be acting like a president rather than a prime minister who, in our parliamentary democracy, should be primus inter pares – first among equals – in relation to his ministerial colleagues and, while leading and coordinating government policy and action, should always take account of differing views in reaching consensus in Cabinet. One result of this presidential style is the Prime Minster seems to be popping up everywhere and commenting off the cuff, with unwise and inappropriate utterances, about too many issues when such unscripted comments would be better avoided.

One well-publicised example was his unthinking remarks about putting Bahamians first in response to questions about aid to Haiti following its recent earthquake. Despite subsequent efforts to downplay this incident, this was clearly insensitive in the immediate circumstances of a natural disaster affecting a neighbouring country even if in itself the thought was right as a general proposition in normal conditions.

Another relates to his visits to the Family Islands. While it is good for the Prime Minister to be as visible as possible around our scattered archipelago, we question his judgment in using town hall meetings in Great Harbour Cay and Crooked Island to defend controversial actions like excessive spending on official overseas trips and the purchase of the Grand Lucayan hotel in Freeport. At meetings of this sort, he should surely be describing his government’s policies and listening to local concerns while proposing solutions to people’s problems or promising to look into them.

A third, and most recent, example was last week’s town hall meeting in South Eleuthera which was, ostensibly, a chance for local people to give their views about Disney’s proposed cruise port development at Lighthouse Point.
What we saw was a quite simply a pro-Disney. According to reports, without voicing outright support of the project Dr Minnis not only spoke about new job opportunities but also downplayed his government’s power to intervene in what he said was privately owned property while stating simultaneously that a Cabinet decision on the matter was expected soon.

Amid claims that One Eleuthera Foundation’s alternative proposal, backed by the Bahamas National Trust, to create a national park, eco-lodges and a research centre has not been properly evaluated by the Government and that an Environmental Impact Assessment of both proposals has not been done – while there has also been inadequate public consultation – we counsel caution in reaching a premature judgment about this controversial issue. However, the Prime Minister himself has indicated a decision will be made at a meeting of the Cabinet today.

We wonder whether any lessons have been learnt from the mishandling of the Oban oil refinery project. Governance is about weighing up and reconciling conflicting views and priorities in order to make objective and rational decisions in the people’s overall interest. In a democracy, our elected representatives need always to reflect the views of the majority and carry public opinion with them; and, to achieve this, they must be seen to adhere to their own procedures and consult widely. In the case of Lighthouse Point, it is hard to see why a decision is being rushed through when it would be wiser to tread more carefully.

We hope this issue will not become another example of misdirected thought and management on the part of a government that needs informed and effective leadership. Sadly, it seems to be losing its way despite the high hopes of last year’s election.