Questions prepared for The Tribune but released generally 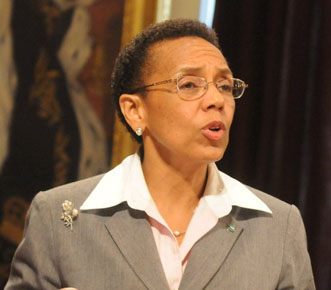 Q. Could you recount what it was like for you hearing Baha Mar filed for bankruptcy when it did?

A. I can do no better than repeat the words of Prime Minister Christie (PM Christie) – the Government was blindsided by the Developer’s Chapter 11 filing. Please remember, as PM Christie said, Mr. Sarkis Izmirlian, the Developer, had asked him to intervene with, Mr. Izmirlian’s partners (especially the China EXIM bank “the Bank”) to assist with funding to complete the project. At Mr. Izmirlian’s behest, PM Christie met with persons at the highest levels in the People’s Republic of China and the Bank. PM Christie has said that on 29th June 2015, when Mr. Izmirlian came to meet with him, PM Christie was looking forward to relaying to Mr. Izmirlian the good news that a way forward to financing completion had been found. Rather, Mr. Izmirlian relayed to the PM that, as they were speaking, at the Developer’s initiative, a Chapter 11 bankruptcy filing was taking place in Delaware. The Government of The Bahamas (GOB) was blindsided by this news and deeply concerned about the impact that it would have on the Project (the hotels, casino, and convention center), the Bahamian economy and Bahamians. It was apparent that the Developer had no funds available and no buyer ready to complete the Project.

Q. Please recount what happened from then to the moment the SLS was opened.

A. GOB engaged top international advisors from the UK, USA and China to work with our team of national experts.

The experts were concerned that the Chapter 11 process could take 2-3 years (until 2018) and the Project would remain shuttered for that period. This would have devastating consequences on the Bahamian employees of Baha Mar, the Bahamian entrepreneurs at Baha Mar and on the Bahamian economy.

The Parties were not able to resolve their differences.

Under the supervision of the Bahamian Court, expert advisors were able to cause a favorable outcome for The Bahamas and Bahamians –

The successful outcome of the negotiations is proof that the Christie Administration took the right steps at the right time for The Bahamas and Bahamians. Go to Baha Mar. Look at the happy faces of the young people working there. If that is not enough, consider that by any yardstick Baha Mar is successful – its occupancy levels are exceeding projections; it is having positive impact on the Bahamian economy; it has upgraded and added value to the tourism product, including LPIA; in their assessments of The Bahamas, international agencies are reliant on the direct and indirect positive impact of Baha Mar; and, there is generally a feeling of hopefulness and optimism because of Baha Mar’s success.

Q. How much of your work as Attorney General during that period involved trying to get Baha Mar opened?

A. A significant amount of time and resources of the GOB, including the Office of the Attorney General (OAG), were spent working with stakeholders to get Baha Mar completed, open and operating – owned by a world class entity that could successfully operate that significant Project. The first class Team at OAG rose to the occasion. As well as working on the vitally important Baha Mar Project, we successfully carried out our other responsibilities and accomplished our goals.

Q. Were there false starts, moments when you thought remobilization was imminent only to find out it wasn’t? If so, can you describe them and say what turned out to be premature about those moments

A.  As the negotiations were carried out in an atmosphere of mutual respect, we were able to stay focused and to overcome perceived obstacles. We were determined not to be distracted by the naysayers, some of whom were reckless about the adverse impact of their utterances as they pursued political (and other) interests rather than the national interest.

Q. What happened during the trips to China? Can you recount the points of contention between the two sides and describe the format and lengths of the meeting? Did they ever turn angry or involved swirling emotions

A. The travel from The Bahamas to China is 20-24h. On each of the trips to China, we attended meetings soon after arrival in Beijing and met into the late hours of the night/early morning. The Bahamian team then had to brief the PM and advisors in The Bahamas (12h behind Beijing) before retiring. We seldom got as much as 4h sleep.

The negotiations in China and The Bahamas were conducted in an atmosphere of mutual respect.

As can be seen, these key points were achieved.

It is important to note that although there was a view that there was no legal obligation to pay the employees, the entrepreneurs and GOB. GOB was adamant about the aforementioned positive outcome on these key issues.

The positive results from the Bahamian focused strategy of the Christie administration are pellucidly clear. Over 4,000 Bahamians are working at Baha Mar. The employment of thousands of other Bahamians is an indirect result of the success of Baha Mar.   Bahamian entrepreneurs are directly and indirectly benefitting from Baha Mar. Baha Mar, Atlantis and other hotels are experiencing occupancies beyond projections. There has been tremendous value added to the tourism product. The Four Seasons has returned to The Bahamas. Atlantis has expanded its experience. Sandals and Breezes are upgrading their product.  LPIA is handling more passengers than projected. And there is much more spin-off now and to come because of the success of Baha Mar.

Q. Did you ever doubt the administration’s strategy amid all the public criticism

A. I did not doubt the strategy and the advice of GOB’s national and international experts.

I kept focused on 2 primary stakeholders: (1) the small to midsized entrepreneur who may have entered into a second mortgage to participate in Baha Mar. The Chapter 11 and subsequent closing of the Project would have caused him a significant loss, including the real possibility of losing his home; and, (2) the Bahamian employees who then faced unemployment lines.

International observers, including from the Harvard Business School, say that it is unusual, if not unprecedented, for a development to emerge from a Chapter 11 filing with:

International observers were impressed at the competence of the GOB, Bahamians, and stakeholders to defy the odds. Emerging from the Baha Mar insolvency litigation (the Chapter 11 and The Bahamas proceedings):

This outcome has enabled The Bahamas to avoid further downgrading by rating agencies and possible devaluation of our currency.  It has also restored confidence and optimism in The Bahamas and the Bahamian economy – see the projections of international agencies about the growth of The Bahamian economy. The projections and the optimism are heavily reliant on the success of Baha Mar. This success is directly linked to the prompt action, wise decisions and vision of the Christie administration.

As we look back, it is clear that the then Opposition either didn’t understand or appreciate what the Christie Administration was trying to achieve or they were indifferent to the facts. We supported a “real sale” to CTFE, a world-class owner, that is listed on an international stock exchange, invested in well-regulated jurisdictions, is serious about its investment in The Bahamas and realizing, for the benefit of Bahamians, the full potential of Baha Mar, which is a multi-billion-dollar investment.

Q. Are you able to say if Cabinet was unified behind the strategy

A. GOB was unified in pursuit of the vision and objectives.

Q. Did you meet any important figures of the Chinese delegation we didn’t know about? Is it safe to characterize you as the main player in the administration’s effort to get Baha Mar restarted, the “worker bee” toiling behind the scenes even when others were giving the public commentary

A. I was privileged to serve The Bahamas as Attorney-General at that time in our national development. Sir Baltron Bethel and I CoChaired the negotiations. I am grateful for Sir Baltron’s expertise and sage advice. He has been honoured by Her Majesty for his contributions nationally and internationally to tourism development. In this Region, he is still regarded as the leading expert in tourism development. Sir Baltron Bethel is a Bahamian national treasure. I am also grateful for the advice of our national and international experts. Bahamians can be satisfied that in The Bahamas we have world-class lawyers and technical advisors.