ATLANTA MAYOR HAD A FULL PROGRAMME IN NASSAU 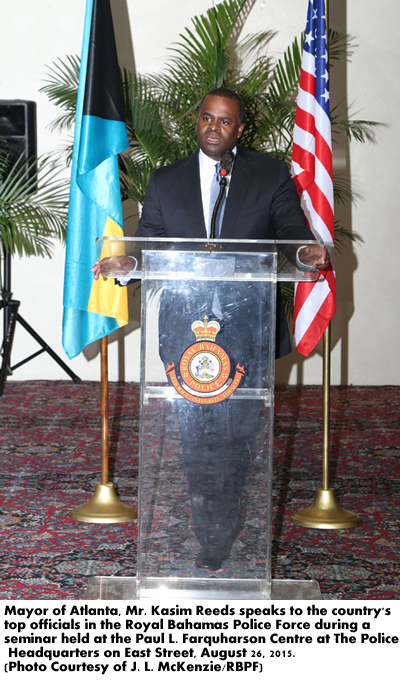 NASSAU, cialis canada illness The Bahamas — On the heels of a recent visit to Atlanta earlier this year, Minister of Foreign Affairs and Immigration, the Hon.Fred Mitchell announced that The Bahamas looks to partner with Atlanta to combat crime. The Mayor of Atlanta, Mr. Kasim Reed along with two officials from his office, paid a special visit to The Bahamas to commence discussions on the way forward.

A press conference making the announcement was held on Wednesday, August 26, at the Paul Farquharson Conference Centre at The Police Headquarters on East Street.

Minister Mitchell said given The Bahamas has close ties and shares similarities with Atlanta, a partnership between the two places seems ‘ideal.’ Mr. Mitchell pointed to the large number of Bahamians living and studying in Atlanta, the proximity of Atlanta to The Bahamas, and the high traffic of Americans traveling to The Bahamas from Atlanta as some of the areas that make Atlanta an ideal potential partner in the fight against crime in the country.

“During a visit to Atlanta, I met with Mayor Reed and during exchanges, we held discussions on how the Mayor was able to combat crime in Atlanta over the past few years,” said Mr. Mitchell. “These discussions led to the Mayor’s visit here today.”

After expressing his pleasure at visiting The Bahamas for a second time, Mayor Reed said that he believes that some of the strategies he implemented in Atlanta may assist The Bahamas in its crime fight.

“First of all, I wish to express my appreciation for being invited to The Bahamas to participate in these important discussions,” said the Mayor. “When I was elected into office, Atlanta faced similar crime issues that you are plagued by in The Bahamas. As a result, my office implemented several strategies to combat crime.”

Included in those strategies was the implementation of innovative technologies, including video integration centres (currently already in use in The Bahamas); predictive policing; increase in public safety funding and targeted youth programmes including ‘centres of hope’ which provide services to 1,500-1,700 youths weekly and up to 3,000 during summer months. He said, to date, the centres have caused a reduction of 20% in the crime rate among youths. 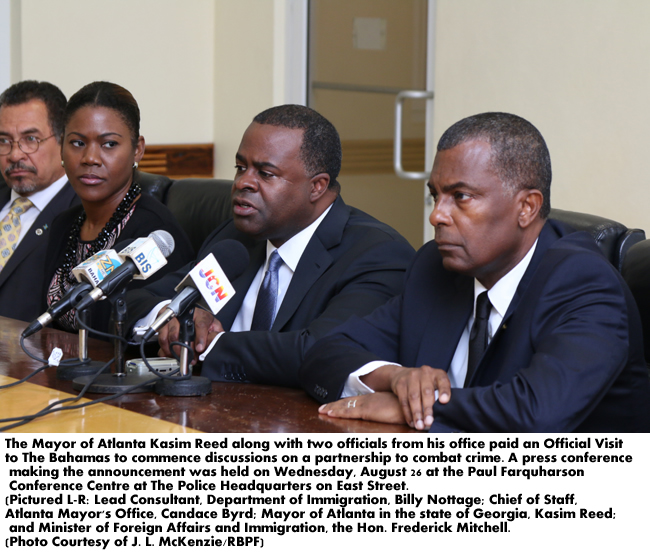 Mayor Reed, who was recently re-elected for a second term in office said that his office led the initiative to implement the ‘Ban the Box,’ policy, which eliminated questions of a potential employee’s crime history on application forms. He noted that this allowed a prospective employee the opportunity to explain his/her criminal past during an interview instead of being eliminated at the application stage. This was especially significant for young persons who may have been previously charged for petty crimes.

In addition, Mayor Reed said that during his tenure, he also placed state-of-the-art vans on the streets of Atlanta, which are used as mobile training centres. He said that Atlanta is presently in a construction ‘boom’ which he believes will further push the state’s crime levels.  Finally, Mayor Reed said in his view, another effective strategy to combat crime is a robust police force.

During Mayor’s Reed term in office, the city of Atlanta experienced a reduction in unemployment from 10.4% to 6% today, which he says is trending downward with the boom in construction.

Mayor Reed was accompanied by his Chief of Staff Candace Byrd, and the Director of International Affairs Claire Angele.  During his three days in Nassau, the Mayor’s team scheduled visits with stakeholders including members of the business community, religious leaders and students at The College of the Bahamas. On Wednesday, he held discussions with the country’s top brass in the Royal Bahamas Police Force.

The Mayor of Atlanta Kasim Reed made a presentation at The College of The Bahamas on crime fighting initiatives and youth development Wednesday evening, August 26, at the Harry C. Moore Library. The Mayor and his team are on Official Visit to The Bahamas, and have met with government officials, the police, and clergy. Pictured is Mayor Reed addressing the audience in the Harry C. Moore Library. (BIS Photos/Derek Smith) 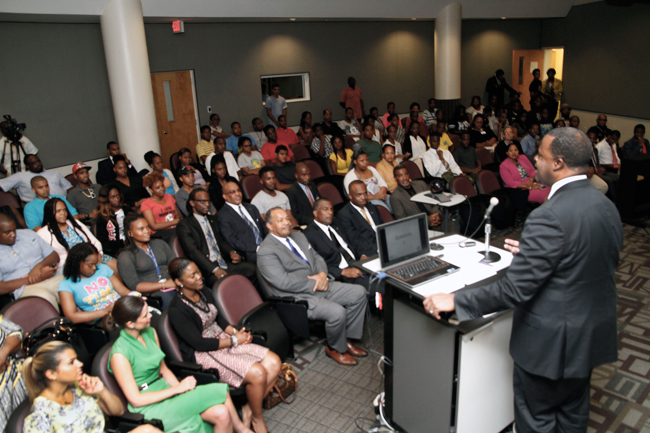 Pictured is the President of The College of The Bahamas Dr. Rodney Smith, right, greeting Mayor Reed, left, as Minister of Foreign Affairs and Immigration the Hon. Fred Mitchell looks on; and Mayor Reed addressing the audience in the Harry C. Moore Library. (BIS Photos/Derek Smith) 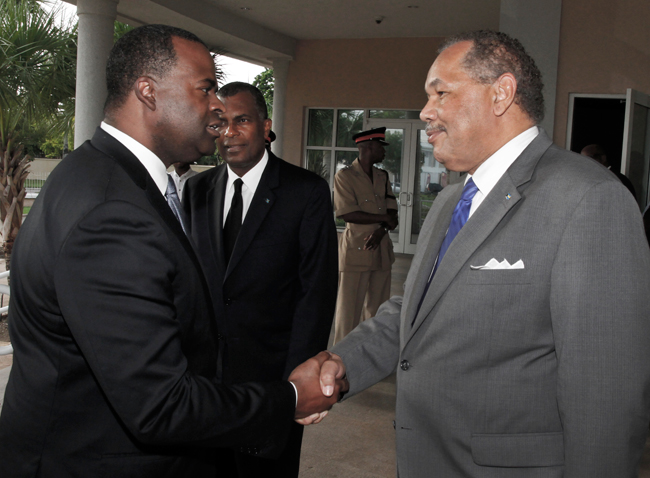