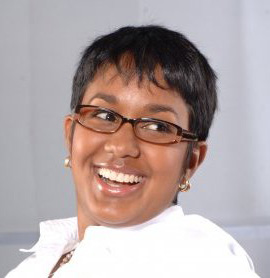 On 31 January Marla Dukharan, ( the lady in the picture) group economist for RBC’s Caribbean operations, said: “I am disappointed that despite having the most successful VAT in the whole region – despite getting more from this VAT than you expected to – the fiscal deficit was not reduced in the way it had planned to be reduced. Fiscal prudence had not been adhered to.

“This is going to put pressure on the currency. It has already put pressure on your ratings. I believe that if you continue on this path of persistent fiscal deficits, which drive debt up, you will end up in a situation where it’s unsustainable and you have to get help. That is where we consistently end up in the region.”

It is interesting how the Royal Bank of Canada has one of its employees talking down the fate of its largest domestic customer in The Bahamas, having just taken part in lending the Government 150 million dollars to help the country get through the hurricane.  That seems just dumb business.  Rule number one is economists should stick to what they know best and leave the public policy to the political parties.

If she wants to say those things in private then fine but to go and bad mouth the government in the face of the prevailing counter arguments is just plain dumb.   It is simply out of line and she should be told her public opinions are no longer welcome here.

Let’s get the facts straight: there is no pressure on the currency of The Bahamas; the debt is not growing at the rate which it was before, and the deficit is coming down though not at the rate the government thought because of unexpected demands on the revenue, i.e. the hurricanes.

This country has managed very well thank you, and does not need nay sayers who know how nothing goes to go on the attack.   The issue which faces every Caribbean country is social disorder and using up every scrap of the credit which the country has to be able to get us through.  It is being less than frank to suggest that a government hit with two major hurricanes in two years is not properly managing the deficit.  You are damned if you and damned if you don’t.

We cannot say how offensive we find this public commentary.  It reminds us of an intervention which Donald Fleming, the former Finance Minister of Canada, who came here to run Scotiabank in the 1970s.  Arthur Hanna was the Finance Minister and made it clear that Mr. Fleming could keep his advice to himself.  This lady’s advice is not good advice at all and as Oscar Wilde used to say you should keep it to yourself, since that is the only use for it.

PrevPreviousWHAT ARE WE GOING TO DO ABOUT OUR YOUNG?
NextSTATEMENT BY BRADLEY B. ROBERTS IN RESPONSE TO FNM CRIME SPEECHNext