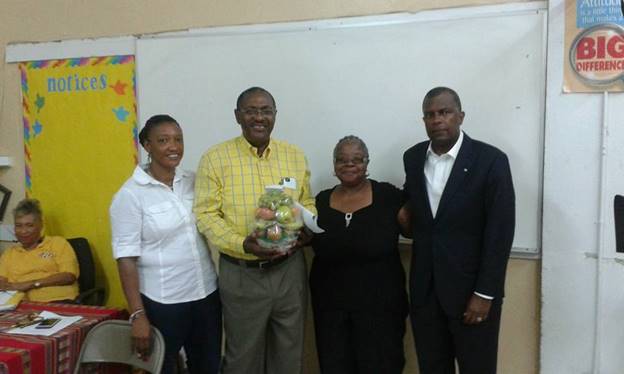 My extend my personal commendation and that of the party to your Chairman, Ms. Charlene Marshall and her executive team who continue to work tirelessly in community outreach and who never forsake the assembly of the support base. Fox Hill meets regularly; the honourable member for Fox Hill never misses a meeting if he is in town and always uses that opportunity to update the supporters on the works of the government.

With your indulgence I wish to say just a few words about Mr. Mitchell:

He is the model MP, there is no question about it. He visits his constituents often; he holds regular office hours to see his constituents; he is readily accessible and returns all phone calls – he ducks no one. Mr. Mitchell fully participates in the cultural life and development of the Fox Hill community.

There is an independence ecumenical service and flag raising ceremony, an emancipation ecumenical service and a Christmas tree lighting ceremony every year without fail. When the government of Pindling through his duly appointed cultural commission chaired by the late Winston Saunders challenged all communities to celebrate independence locally, I believe Fox Hill is one of very few communities that have consistently met that challenge. Activities such as the ones I mentioned help to strengthen the bonds and deepen the identity of communities engaged in such activities.

As a Minister, Fred is strong and takes a no-nonsense approach to his portfolio. He is transparent in his communications with the public and is accountable, disciplined and conscientious. As a legislator, he is meticulous in his presentations, a fierce Debater and a jealous guardian of the tone, tenor, letter AND initial intent of our Supreme Law. And as we found out recently, Fred is a fierce defender and protector of long held parliamentary privileges.

Fred fully expects to offer himself once again for public service in the 2017 General Elections. I believe that he has sufficiently earned your trust and confidence that you will send him back to Parliament for a fourth time whenever the next General Elections are called.

Let me hear your agreement by a rousing applause.

I entreat you to give of your time and talents to his re-election campaign as you have over the last four elections. It seems like it was just yesterday that Fred battled Mrs. Dorsett for the hearts and minds of Fox Hillians, but that was 1997 – 19 years ago; my how time flies when you are having fun.