CHINA TO HELP WITH EYE SIGHT ISSUES IN GBI 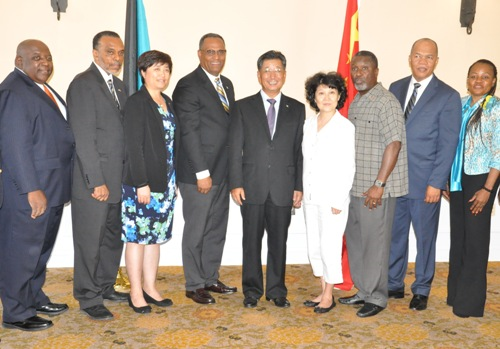 FREEPORT, Grand Bahama – For the second consecutive year, the Government of the People’s Republic of China has partnered with the Government of The Bahamas and the Ministry of Health to provide surgical intervention to help restore eyesight to many local residents who suffer from cataracts.

It was said that the President envisioned assistance given to Caribbean persons who were suffering from disability associated with cataracts, and he pledged his support by sending 100 medical professionals to the region to help treat those persons in need of help.

Dr. Darville pointed out that the health and well-being of Bahamians is of paramount importance to the Christie Administration and that the Prime Minister led the way for the beginning of this new partnership.

According to the Minister for Grand Bahama, during the first year of the project some 101 surgeries were performed by a surgical team of eight doctors and nurses in New Providence.

He advised that those patients were identified from New Providence and the Family Islands, 32 of whom came from Grand Bahama: Dr. Darville referred to kind remarks from a lady in his Pineridge Constituency who had the surgery last year.

The Minister for Grand Bahama was also pleased to point out that the People’s Republic of China provided and donated all the equipment, instruments, medical supplies, and pharmaceuticals for the project, a gift valued at over $570,000.

Continuing, Dr. Darville said that “as Minister for Grand Bahama, I am elated that today, we are preparing for the second Bright Journey programme scheduled for November of this year and this time it will be held on the Island of Grand Bahama and will provide free cataract surgeries for 120 persons on Grand Bahama, its surrounding cays, and the Northern Bahamas.”

The programme will be coordinated by Dr. Paul Ward, Medical Chief of Staff at the Rand Memorial Hospital and supported by a surgical team from New Providence.
Dr. Darville also took the opportunity to express his gratitude to the Ministry of Health, the Public Hospitals Authority and Grand Bahama Health Services for their help in making the event a reality.
“In closing, on behalf of the people of Grand Bahama, I express our sincere appreciation to His Excellency Yuan Guisen, Ambassador of the People’s Republic of China to The Bahamas, and the Bright Journey medical team, which is headed by Professor Yang Liu of Peking University First Hospital, in Beijing, China,” he stated.