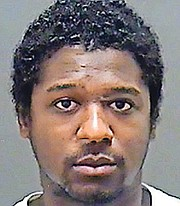 We are always concerned at the propensity of this society to find some way to embarrass, harness, impede defame and slander young males in the society who appear to be making a peaceful and successful way through this society. When the picture of Jared Higgs appeared in the press connected with alleged “doping “issues”, this was really quite a shocker.  However, it turns out that this is yet another example of the demonization of someone who doesn’t deserve it and has been slandered unfairly by these overzealous sports bureaucracies. The report in The Tribune is the counterpoint to the accusations.  Mr. Higgs is a reporter and has been developing a well-directed career first at ZNS and now at Ouor News. We publish this in support of his case and his reputation from The Tribune

JARED Higgs’ lawyer Vincent Wallace-Whitfield called it a “travesty of justice where due process was not followed” in trying to determine how his client could be banned for four years from the Bahamas Football Association when he was never tested for any banned substances.

The BFA announced on Monday that Higgs was banned while Ehren Hanna, Torin Ferguson, Lamar Cancino and Christopher Davis were all sanctioned following anti-doping testing last year prior to the CONCACAF Qualifiers and the FIFA Beach Soccer World Cup.

According to the BFA’s website, the BFA Appeals Committee agreed to ban Higgs for four years in accordance with the mandatory BFA Pre-Competition Testing, FIFA Anti-Doping Regulations 5 – 3 and 8, and WADA Anti-Doping Code 2015, V1.10.1.1 and 10.2.1.2. However, Wallace-Whitfield said Higgs is in the process of continuing to fight the ruling that they don’t understand what it is the BFA is trying to say.

“He was not notified that he missed a test until June or July of 2016, six months later before they got around to notifying him that he had allegedly missed the test,” Wallace-Whitfield said. “The question I am trying to get them to answer, which up to now has not been answered, s who is conducting the test? Is it being conducted in accordance with WADA rules authorized by doping control officers from the Anti-doping Commission? and is the results of that test being analysed by a WADA approval laboratory?”

Except for the ruling which was handed down and posted in the BFA website, Wallace-Whitfield said none of their answers to their questions have been submitted to Higgs, either personally or through his legal counsel to show who is doing what and if it’s being conducted in accordance with international rules as mandated by FIFA or WADA.

Having just received the ruling last week, Wallace-Whitfield said they are in the process of appealing the matter, either to the Court of Arbitration in Switzerland or whether they will file a lawsuit in the Supreme Court to have the matter set aside because in their opinion, due process has not been followed.

“There was a notice of appeal in October and when I showed up on his behalf, the people told me that they didn’t want to hear from me,” Wallace-Whitfield recalled. “They say I have no rights to speak, I have to rights to question them. They only want to hear from Mr Higgs himself.

“I’m asking myself what kind of joke is this? The rules of the international organization clearly allow him to be represented by counsel if he wants it, or anybody else of his choice. That is what representation consist off. But they want to silence you and basically didn’t hear anything he had to say.”

Based on the minutes from the meetings, Wallace-Whitfield said it appeared as if the BFA and the Appeals Committee had already made up their minds and were determined to ban Higgs even without trying to decide whether or not they agree or disagree with him.

“He had a disciplinary hearing and he had an appeal hearing. At the appeal hearing, I made representation on his behalf, but the people tell me they are not interested in hearing from me,” Wallace-Whitfield stated. “At the disciplinary hearing, he wasn’t advised of his rights and he had to write whether he could have an attorney or someone of his own choosing to assist him or to represent him.

“It’s a travesty of justice where due process was not followed when they come up with this crazy decision, based on what? Ordinarily in most anti-doping procedures, a person would show up unannounced, present their credentials and identify themselves as an Anti-Doping Officer come to conduct a test and if you refuse at that particular point, you’ve committed an offense. We don’t even have that. There’s been no evidence given or shown or produced by them that in any stage of the proceedings when this situation would have occurred.”

Wallace-Whitfield said it appeared that the BFA had already made their decision on Higgs without completing the due process. He said the BFA could not prove when and where Higgs breached the rules and they only assumed that he did something wrong and subsequently banned him.

In reference to the other four players who were sanctioned, Wallace-Whitfield asked who took the test? Who did the analysis? And where did they send the samples? While he said he’s not making representation on their behalf, he just wants to know if the proper procedure was carried out in all of these cases.

Wallace-Whitfield said “you can’t get to second or third base in a baseball or softball game without passing first. First base requires you to follow the rules by whatever organization that introduced these rules in the first place. We don’t have any indication from them in writing, verbally, anyway shape or form on any that they followed any particular cause of rules.

“They jump off trying to insinuate that this man is a drug cheat and that he failed to take this test, but the situation is what rules did they follow in order to get to the particular point where we’re at and they’ve never demonstrated that. They will find themselves very shortly either in the Supreme Court or in front of the Court of Arbitration for Sports in Switzerland to explain that side of things and prove it to an independent body that will be reviewing this particular matter.”

As a result of the damage that the BFA has done to Higgs’ name and character, Wallace-Whitifleld said they will also be seeking monetary damages.