ED FIELDS ON US VS BAHAMAS VIOLENCE 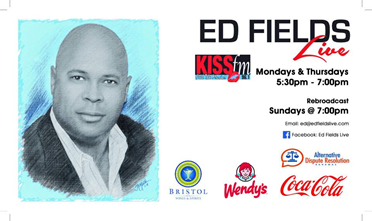 People find it remarkable that the United States awash with murders and mayhem everyday has the temerity to warn people about the murders in Nassau.  The violence in Nassau is scary but the Bible does say something about the mote in your own eye first.  There was controversy again last week as the DNA Leader Bran McCartney accused the Minister of Tourism of not responding to an e mail about additional security warnings from the Carnival Cruise lines about the Port of Nassau.  Ed Fields, who is a radio commentator, wrote on his Facebook page his angst about this issue of violence in The Bahamas and whether the United States is qualified to criticize.  We have a rather more gentle view and that is the US has a responsibility to warn its citizens if they are going somewhere to  say what they know about the situation.  We do the same about  the United States, for example, we warn Bahamians about their personal safety and property in Miami where murders and robberies are common.  That does not stop Bahamians from going to Miami.  We don’t think that the warnings will stop Americans from coming to The Bahamas.  We do have to get on top of the problem however.  Here is what Mr. Fields had to say on 2nd October:

I have a child in College in the U.S. It is a great country with great institutions which the world should seek to emulate. The Bahamas is a developing country with a long way to go and much to learn. I sit in front of my T.V. set however and I am in a state of confusion.

It is catalized by the news that yet another lunatic has caused the expiration of randomly selected innocents. This time at an Oregon community college. I listen to a bereaved father state that more Americans have been killed by gun violence since 1968 than all of the U.S. soldiers killed in wars since then.

I do not seek to excuse the gun violence that we are experiencing here, but I know the following.

1. We do not manufacture guns in The Bahamas. They come in from the United States and there is no culpability.

2. We do not produce drugs here but they are transhipped into the United States, for which we are held culpable.

3. Of 25 to 30 million visitors that have graced our shores over the past 5 or six years, a single American has been killed due to a botched armed robbery. We are held culpable. There are travel advisories that have damaged our almost singular economic engine.

4. There is more of a possibility of our sons and daughters being killed on a college campus than a visitor to our shores being killed. I have personally come close to two terror incidents. One at the Olympics in Atlanta and another when someone attempted to set off a bomb off Broadway.

5. There are no travel advisories warning world citizens that they could be randomly killed at an amusement park, a college campus, a movie theatre or a shopping mall.

6. Are Bahamian lives snuffed out by American made guns smuggled into The Bahamas less valuable than American lives impacted by drugs transhipped (not produced) through The Bahamas.

This is not a condemnation, just a call for fairness void of the taint of hypocrisy.

Is my state of confusion justified?