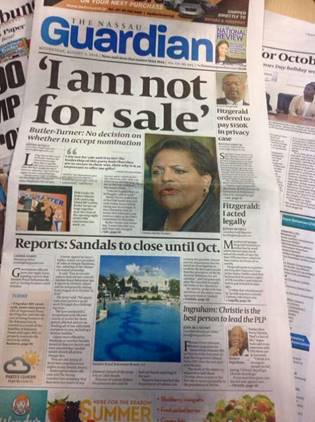 You would have to be forgiven for thinking that the Free National Movement and its leaders have taken an insanity pill. Six months before a general election they are in the middle of an unprecedented meltdown of craziness and slashing and burning that simply makes no political sense. In fact no sense at all. It is stupid and crazy. Someone needs to tell these people shut the fuck up already. The battle for the convention is over. Go get a life.

Loretta Butler Turner can’t get over the fact that she was going to get a royal cut ass; she was outmanoeuvred. She and her conspirators forced FNM Leader Dr. Hubert Minnis to have a convention that he did not want and now when he cuts their asses, they are complaining. Mrs Butler Turner is too mouthy by far and doesn’t think before she opens her mouth.

So it was no surprise that when in an effort to make peace, it was suggested that she might take on other roles in the party, she goes and blabs to the press that she is not for sale. How stupid, how asinine. Why not shut the eff up. Why are you burning all your bridges behind you? How will you survive in Long Island? There is no future for her as an independent in Long Island

Meanwhile the other political nut case Andre Rollins on the night of the Emancipation Day holiday, declares a freedom of his own. He releases a statement which is a classic meltdown. He throws Loretta Butler Turner under the bus just like he had earlier savaged Perry Christie and then Hubert Minnis before her. The narrative about a fellow you cannot trust and whose mind works in the quirkiest way continues. Another one who should simply shut the fuck up and stop talking. Shooting himself in the foot. Foot in mouth disease. Good Lord!

He says in his press release, he will not run as an FNM under Dr. Minnis. Okay fine. Carry your ass. Resign. But no he wants to aprobate and reprobate at the same time, by inviting Dr. Minnis to rescind his appointment as opposition spokesman on National Security. Good lord!

Neko Grant MP then gets up and says he too is gone as Opposition Leader in the House. Fair enough. Seemed like an admirable thing to have done. But should he have blamed it on his Leader or should he just have just quietly resigned, since he had opposed Dr. Minnis so openly and he was simply the only thing to have done? But at least Mr. Grant followed the conventions.

Theo Neilly MP says he is not sure if he will be around the next election comes around.

Richard Lightbourn MP is totally clueless about his role as the UBP’s front man in the present day. He was thrown under the bus by Dr. Minnis who said he didn’t clear his address, in fact refused to do so before he spoke and then blindsided the party with his statement about tying women’s tubes involuntarily. Mr. Lightbourn clueless as ever said he was misinterpreted, even after his politically dictated formal apology.

Then strangest of all things was then Milo Butler’s granddaughter gets up, the very same Loretta Butler Turner with her hard fucking mouth gets up in the House of Assembly 3rd August and apologises for the white man and Bay Street boy rep Richard Lightbourn, saying that we must forgive him because we all make mistakes. She says that the PLP did not respond when Leslie Miller made joking comments about beating his girlfriend so why was the PLP outraged now. First of all, it was not true that the PLP was not outraged by Mr. Miller’s comments. Secondly, that is irrelevant to the case at hand, which is what Glenys Hanna Martin MP pointed out in the House on 3 August in response. Mrs. Butler Turner was also immediately made the laughing stock of the House when Mr Miller reminded her from his seat that that she was not one to talk as she had slapped Andre Rollins, the FNM MP in the House herself. She liked to beat men, he said.

Darron Cash goes on the radio on 4 August, a former Chairman of the FNM and Senator, and says that Dr. Minnis played the race card against Mrs. Butler Turner, making it look like she was a front woman for the white merchant vote. Mr. Cash must have known that this is red rags to the bull for the core support of the white people who naturally support the FNM. Mr. Cash should have let it go but he opened his mouth. So Peter Turnquest, the Deputy Leader of the FNM who should also have let it go, had to answer and called the talk show and attacked Mr. Cash in the public domain. Headlines again.

The evil one Hubert Ingraham, the former Prime Minister, who was planning to come back but got way laid when people sent messages to him to carry his ass and don’t come back, decided he would mess up things in revenge even further for the FNM by announcing in his slimy backhanded way that Perry Christie is the best person to lead the PLP, predicting in effect that Mr. Christie’s PLP will in the next election slaughter the FNM in its present state. That’s what you call wicked and begrudgeful. No stupid.

Now all of this played out in the public domain in front of the people on TV and in the press and in the House of Assembly.

Against this background the FNM will go to the country and ask them to vote for them from a five-year term. They will fight corruption says Dr. Minnis but they have yet to acknowledge that the man who was convicted on corruption was an FNM and it happened during the FNM’s watch. So who needs to fight corruption? It would seem to us the FNM. He forgot to mention and acknowledge that Loretta Butler Turner, his own member, said in her campaign that the FNM is full of corruption and crime under his leadership.

Someone could have paid 50 dollars for those seats in the House of Assembly on 3rd August.

Now back to the PLP: beware of complacency. We are not sure the public at large is paying any attention to this. We must work while it is day because night comes when no one can work.

But we repeat this one from one of the FNM MPs who said this: “If I was Perry and people had registered to vote right now, I would call elections and wipe them fucking out.”