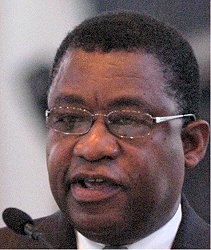 20 December 2017
Former Finance Minister James Smith told The Tribune that The Bahamas is too eager to sign up to these agreements on financial services. Here is what he said in his own words with which we entirely agree:

“The Bahamas is too eager, and not just the Bahamas but other countries, which were never at the table to begin with and never invited to provide their recommendations They’re simply going along with being led to the slaughter…. It’s extra-territorial imposition from the outside, and a modern form of colonialism. The Government is kowtowing to it without looking at it properly and fully understanding it.
“We shouldn’t implement a corporate income tax because others say it’s the thing to do. We started off without a corporate income tax, and did quite well. I’m bewildered at how eagerly we’re bending over. They’re [the OECD and EU] looking after their interests, but no one is looking after our own.”
“They gave us no choice to mitigate, to adjust our taxation system to our circumstances. It seems to me that the whole idea of taxation coming from various sources is to pay for expenditures incurred by the state. You don’t start by telling me: ‘Use this form of imposed taxation on companies’.

“Now you’re telling me to tax such [foreign direct investments] by having a corporate income tax.

“You’re shooting yourself in the foot. We’re competing for FDI with the rest of the world, and you’re asking us to introduce that on them and locals when so far we’ve avoided doing that.

“We’re not doing this to bridge a deficit gap in the Bahamas; we’re being pushed to do this to comply with some external standard. We’re not really understanding the full implications of it. We can’t allow the whole fiscal structure to be rearranged from the outside without taking into account what is happening internally.

“The tragedy of it is that for many years we have invited foreign direct investment into the country with a certain expectation set in our laws.

“They have been here, and now we are turning around 180 degrees, and that in itself is something to beware. We have policies and programmes where we invite FDI, and have certain expectations that are put in our law, and you change the laws on them.

“In doing that, how can they trust we have a level playing field? They came here because they thought we were a sovereign country and that we could protect their rights under our laws.

“Forming alliances with other IFCs to resist the OECD/EU “would be the way to go rather than bend over and say: ‘Look how high I have jumped because you told me’”.