FRED MITCHELL ON BAHAMAR IN BARBADOS 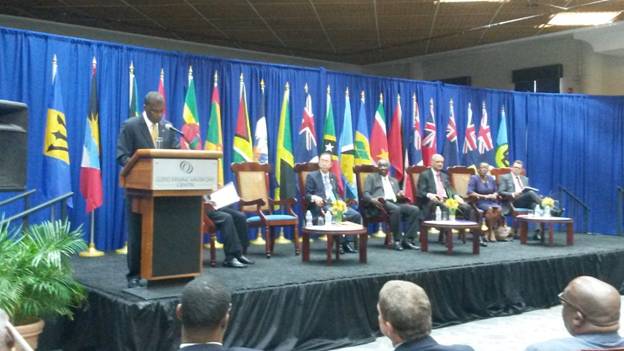 I am to apologise for the absence of the Right Honourable Prime Minister from this dialogue.  He had every intention of being here but as he will say himself this afternoon once he arrives, the best laid plans of mice and men are often delayed by matters of state.

He expects to be here for the formal opening this afternoon.

In a sense the reason for his delay in arriving is a case in point to the vulnerabilities of our region and the lessons in resilience.

Many of you when you visited Nassau in February for the opening of the Heads of Government conference in that month may have seen the giant hotel project going up next door to that venue.  We had plans to open that facility within months of the conference.  Instead the developer was unable to deliver on the promise of the opening and a bitter set of recriminations began in the public domain about who was at fault.

The government felt compelled in the national interest to step into the middle of the dispute, given the fact that some 2000 young people had been taken on in anticipation of its opening and the fact that some 3 billion dollars had been invested: 2.6 billion in Chinese Ex Port Import bank capital and 700 million of the developers money and another 100 million from the China Construction Company.  In the language of the Americans that is too big to fail.

Yet despite the good faith efforts of the government and its best endeavours, the developer chose instead to file for bankruptcy of the project in the American courts where the companies who own the project are registered.  This was done without notice and with the developer sitting at the table on the face of it seeking a settlement.

As often happens, everyone has now become an expert on what should have been done and what should not have been done but suffice it to say that the the Prime Minister believes that this project has to succeed and is working to ensure that it does.  What it raises however is the more general in the vulnerability of our societies not only to the shocks of weather and climate but to the size and singularity of economic projects driven by foreign direct investment and sometimes our own internal investments.

When there is a crisis, we have no reserve currencies to be able to have quantitative easing, another expressing for printing money to ensure liquidity of the system.  These kinds of shocks have resulted in many cases in the high indebtedness that we face today.

Think of the various crises, the banker who had plenty to say to our region and who lectured our leaders like they were in school, who was thought by many to be a model investor, a good guy, only to end up in an American jail and leaving the Caricom country and its citizen holding the bag.  Or the housing and mortgage bubble in one our countries where because of speculation by private investors the market collapsed and the Caricom country had to absorb all its reserve currency to protect the savings of the citizens of that country.  Or the giant insurance company that stretched its tentacles from The Bahamas to Trinidad and Tobago, paying super excellent returns on investments only to collapse in a heap, leaving governments again to hold the bag, while the investor walked away into the sunset.

This in our view shows that notwithstanding all that is said and whatever the fashion, at the end of the day governments still have major role to play in the resilience of our societies and their abilities to adapt to the shocks of and vagaries of the world economy and our natural conditions.  It is imperative then for our public administrations and our political directorates to be trained and up to the mark, adequately prepared for the slings and arrows of outrageous fortune.

I was a much younger man when I heard a speech in Miami by the late Errol Barrow and he reacting to the election fashions of his time, following the defeat of the democratic socialists in the region, excoriated the trend by describing those who looked north for solace and rescue rather than to self-reliance as “groveling mendicants with their caps in their hands”. We are too polite in this time to make those kinds of statements but I think that we get the point that when failure takes place it is to the governments of the region that our people look to for help, assistance and rescue.  No other entity. It is to the leaders and to the politicians.

Our task today is to reassure the region that come what may, our governments, their elected officials have the intellectual acuity, the intestinal fortitude to help rescue our nations.