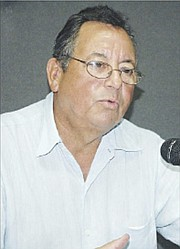 These were the public thoughts from the former Local Government minister, Stalwart Councilor the PLP and former MP for Exuma.  They were in response to the announcement by PLP Leader Perry Christie that he intends to run again for office of Leader, that the Deputy Prime Minister should not run against him and if he does he will have to resign from the Cabinet:

“I don’t think words will frighten anybody from doing what they intended to do. PLPs are made of sturdier stuff than that. We took on the ‘Bay Street Boys’, brought Majority Rule, Women’s Suffrage, lowered the voting age. There are big challenges facing this country and the PLP is the party best equipped to do it.”

“Men aren’t frightened by words, they are challenged by words. I view that as an invitation more than a threat and it’s not in Christie’s nature to be a bully. He’s not a bully.

“It’s his (Christie’s) right to do, he’s certainly entitled to make that decision.

“I’m sure he pondered it and has decided that it is from his point of view the best course of action for him.

“He obviously has to justify that and show what would make it (a leadership race) a distraction. Anyone in the organisation has the right to oppose if they feel it’s the right thing to do for them and then let the delegates decide what to do. I don’t think anybody should be deterred in their intentions…

“It was wrong for those who held office to delay having a convention for this time. That has never happened before and it’s wrong. We should have one every year unless there is a national emergency or an election.

“I fully expect the PLP will have a convention next year in October when the constitution suggests a convention is normally held.”