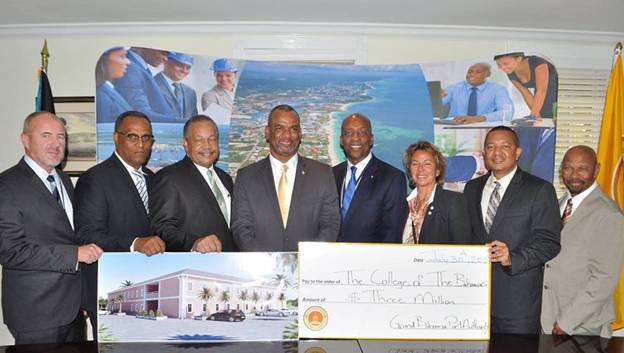 FREEPORT, Grand Bahama — The Grand Bahama Port Authority on Thursday donated $3M for the construction of dormitories and multi-purpose facility at The College of the Bahamas Northern Campus, during a press conference at the Port Authority.

Minister of Education, Science and Technology, the Hon. Jerome Fitzgerald, said he reflected on all of the stages they went through to get to this point, having been a part of it when appointed to the Board of The College of The Bahamas by the then Minister of Education, Alfred Sears in 2002.

The potential is great in Grand Bahama, he said, as the government is currently in the process of negotiating a Memorandum of Understanding with MSC which will see the further development of a Maritime Academy in Grand Bahama.

“We will see the commitment of MSC to providing apprenticeship and training for hundreds of Grand Bahamians on board not only their cruise ships, but cargo vessels.” One of the difficulties is getting Bahamians on vessels to get the necessary accreditation and certification, and described this move as a major commitment to The Bahamas.

As Minister of Education, he continued, “this year I can tell you, we have received probably the highest amount of applications for scholarship grants from the Ministry that we’ve ever received from Grand Bahama. That in of itself is a very positive sign that tells us that Grand Bahamians understand the importance of tertiary education. We know that data and statistics show that persons who have a tertiary education perform much better and earn higher salaries.”

The opportunities are there, and the government is there to assist in specified areas.

Grand Bahama, said the Minister, has always been at the “tipping point” of achieving its potential and the gift from the Port Authority puts the island one step closer.

Minister for Grand Bahama, the Hon. Dr. Michael Darville, also described the day as a special one. He too thanked the GBPA for their donation and said when he spoke with Sir Jack Hayward some four months prior to his passing, he spoke about education in Grand Bahama.

“He (Sir Jack) said to me that one of the reasons why he was pushing so fast to complete the bridge that would connect the Chicken Farm Road, or the Grand Bahama Highway to the rest of Queen’s Highway, was to ensure that when we arrived at this moment with the growth and development of the Northern Campus we would have an express access from the city of Freeport to the Northern Campus.

“So he was not only a man committed to education, he was also a man committed to ensure that the necessary infrastructure was put in place on the island of Grand Bahama that would allow the city to grow, and reach its true potential where one day we will be able to accommodate in excess of 250,000 people.”

Young men and women of Grand Bahama will now have complete facilities available to them, said Sarah St. George, vice-chairman of the Grand Bahama Port Authority, and added the venture is a “great testament” to public/private partnerships which facilitate training and education in Freeport.

“I am proud and excited to be here for this historic launch of the Grand Bahama campus college dormitories and multi-purpose facilities. Today is a very significant day, not just for The College of The Bahamas, but for the future of the young men and women who will now have complete facilities available to them.

“The courses offered by the College of The Bahamas complement other existing programmes offered in Freeport.”

She continued, “the Maritime Industries, one of the greatest prides here on Grand Bahama — Freeport has emerged from a Pine Barren in 1955 to become the Industrial and Maritime capital of The Bahamas.”

As the country grows, having referred to the multi-million dollar expansion of the Freeport Container Port, she said the work force will also grow, “so we must prepare our young men and women with the proper training for these vocations.”

Ms. St. George further added that the Port Authority is committed to education, as they donate close to $500,000 annually in scholarships and other educational fees. Looking at the track record of the company, she said, “Yes. We have played our part in the education of our children, and we have helped make better citizens.”

“Youth and education are paramount to the future of our nation. And going to college or university, plays a pivotal role in the lives of our young people.”

Her father, the late Edward St. George, made the commitment to build the dorms at a cost of $3M. The Port has already donated 50 acres of land and advanced $400,000 for the drawings. Last year, she added, they recommitted to the donation.

Chairman of the Council of The College of The Bahamas, Alfred Sears said “the construction of dorm facilities at our Northern Bahamas Campus is a game changer. Now the NBC will really be able to become the college campus for the Northern Bahamas serving students from around The Bahamas, but in particular, those students from the far flung settlements in Grand Bahama, Eleuthera, the Berry Islands, Bimini and Abaco.

“It is our expectation that the dorms will also serve to create an active campus life for the Northern Campus that will fuel the expansion of the University here, on this island. And yes, we dream that the expansion of the University’s Northern Campus might begin to create various development opportunities in the vicinity of the campus, much like a host of universities have done in the United States to certain once remote areas of that country — an excellent example is the University of Florida, at Gainsville.”

The College of The Bahamas President Dr. Rodney Smith said, speaking on behalf of the faculty who will occupy the campus of the University of The Bahamas at the Northern Campus, the thousands of students who will also attend the campus and the many families who will be affected by these students obtaining a higher education — the partnership with the GBPA continues to benefit the people of Grand Bahama and COB.

“Over the years, our valued relationship with the Port Authority has grown steadily. It has been nurtured and solidified through the intervention of champions and visionaries like Edward St. George and Sir Jack Hayward.

“Years ago they, along with the government of The Bahamas, began helping The College of The Bahamas bring to fruition a dream where higher education would be a catalyst for an economic and social renaissance for the Grand Bahama and the northern Bahamas communities.”

He recalled having breakfast meeting with Mr. St. George, who said it was a dream to have a university presence in Grand Bahama. “Today, we remain committed to that dream. This dream continues to be supported and manifested through the passion for education exhibited by other Port principals,” naming Sarah and Henry St. George along with Ian Rolle.

“I believe both Edward and Sir Jack are nodding their heads in approval this morning, along with the father of our country and the first visionary of a university here in The Bahamas, Sir Lynden Oscar Pindling.”

The first COB campus in Freeport was opened in 1986. In 2005, ground was broken for the new campus in East Grand Bahama, and was officially opened in 2011.

ALMACO Construction Company has been selected to build the facility, using their modular system. It will accommodate approximately 88 students, a cafeteria, offices and a health clinic. Construction is scheduled for early 2016.

It is hoped this campus will become the ‘centre for excellence’ for maritime, industrial, manufacturing and entrepreneurial studies.

David Rulien of ALMACO Construction Company said the company is pleased to have been selected, and it is hoped the first phase will be completed by the summer of 2016. They currently work at the Grand Bahama Shipyard renovating cruise ships and are building Resorts World Bimini.

“I think our modular system works very well. You have a significant reduction in construction time, and a minimum impact to the environment.”