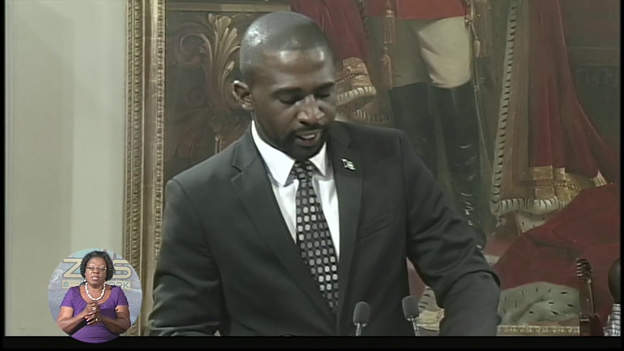 You do what you want with your salary but stop trying to spend other people’s money. This is a shameless act of self –promotion. Sucking up to the Prime Minister by comparing himself with the PM and saying they are both so selfless. What utter bunk. For years, MPs and Senators before him quietly give virtually all of their salaries to constituents; indeed Chester Cooper MP for Exuma and Ragged Island had already announced that all of his salary was going to his constituents. So what he proposes is nothing new. But the principle is wrong in any case. It is your salary, which means you get paid for what you’re doing and so is to be spent on you not on constituents. The Parliament of The Bahamas sought to properly provide funding for things that have to be done qua Senator or MP but when the PLP tried to implement that, the FNM foolishly and short-sightedly opposed it. Here is what The Tribune reported that he said on 28 December

According to The Tribune, Senator Ranard Henfield has challenged Members of Parliament and senators to donate at least a quarter of their salaries to individuals or groups launching community or national initiatives.

They wrote: In what he called the “Salary Challenge,” Mr Henfield pledged to give his entire salary, each month, to “help people, help people.”

In an interview with the Tribune, he said his objective is to turn “national leaders into nationalists” and “financially empower more persons to improve the lives of others.”

“From January 31 to December 31, 2018, my Senate salary each month will go to one Bahamian that can propose and launch a community or national initiative to help at least five children, five senior citizens or five single parents improve their lives,” Mr Henfield said.

“I challenge each senator, Member of Parliament, minister or permanent secretary to donate 1/4 of their salary to a worthwhile cause as well. My objective is to turn national leaders into nationalists. If you look at the House of Assembly and the Senate, there are 55 persons and that does not include other national leaders and board chairmen and permanent secretaries.

“One of the things I find the prime minister and I have in common is we see our jobs as service. We are here to serve the people and if I am here to serve I need to do what is the best interest of the masses and minority groups. So I want to empower more people to help the community, there is no way the 55 of us have all the answers and all the solutions.”

Mr Henfield said in order to receive a donation, an organisation must be transparent in how the funds are used.

“Every month I want it done publicly, it has to be transparent, we have to know what you are doing with the money. To qualify for my salary each month, submit publicly on my Facebook page what your Initiative will be and how you’d use the salary to get it off the ground. I won’t choose the winner. The idea that gets the most approval from the persons that follow my page on the last day of each month wins,” he said.

“For example, you can have my Senate salary for ideas like these: can you provide breakfast to a class or the seniors in a community? Can you provide a safe house for persons escaping abuse? Can you teach adults to read on a weekly basis? Can you launch a soup kitchen and shower station for the homeless? These are ideas we are looking for.

“I don’t expect all the MPs to give but I think a good number of them will. They don’t have to do it in the way I am but as long as it goes to a good initiative. I just need to get more nation leaders to think from a nationalist perspective and not think as a party. It makes no sense to say ‘I am a voice and I want to help persons’ and I cannot assist them with the funding.”