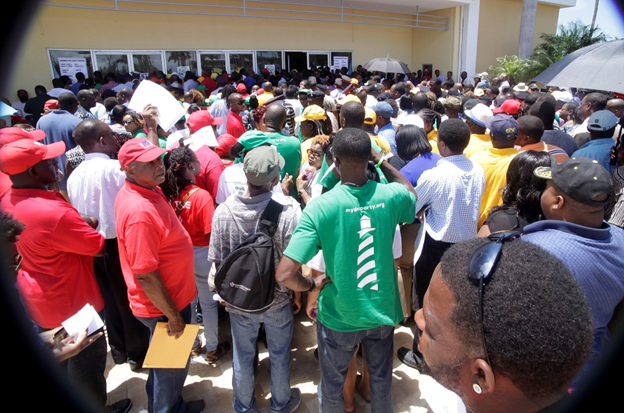 There is no doubt that when the FNM loses this election campaign Hubert Ingraham should take the main blame for the loss.  The Red Dragon from Abaco came roaring back to the stage but at the invitation of the hapless Dr. Hubert Minnis who because he was gaining no traction on the national stage sought to  bring in the big gun whose era he  had pronounced was over.  What a duncey move.  Mr. Ingraham brought nothing new but the same old gotcha politics.

Of all the stupid things he said that night, the great error was threating to fire everyone from the hill top to the valley (see video below).  By that we assume he meant that Dame Marguerite Pindling would be in the hit list as Governor General as soon as the FNM took over.  They would move her.  Mr. Ingraham is not in power yet and his old habits are coming back: fire this one, fire that one.

Mr. Ingraham is behaving like an ass.  How do you open your crude mouth to attack the Governor General of the country when she cannot answer you?  This is a petty, spiteful, begrudgeful man, who simply cannot accept that his era is in fact over and he needs to go sit down and sit small.  His performance was embarrassing,

It was nasty and it was the politics of a bygone era.  We thought that Dr. Minnis didn’t know what he was doing, now it is confirmed that he doesn’t.  Why would you put someone on the stage who outshines you?  Mr. Ingraham is the penultimate speaker at their rallies.  So when he is finished speaking, the next man up is the Leader of the Party Dr. Minnis.  Only there is no one to listen to him because Mr. Ingraham sucks up all the oxygen and people pack up and leave.  Dr. Minnis is left talking to himself.

As for the Treasury being broke, ask Mr. Ingraham if he got paid his fabulous 100,000 dollar pension last week?  If it’s broke how come he got paid?

We leave you with this.  Mr. Ingraham’s claim that the can get any information that he wants out of the government. He said with his bad grammar and pronunciation that there is nothing that he cannot get out of the government.  We believe him because the PLP refused to remove his spies and agents out of the service.  So not surprising, but when you did one grave dig another.  The flip side of that is that when you see what happened on Wednesday with the chaos at the advanced poll, pin Ingraham’s name on it.  He ordered his people to clog the doors.  He ordered his people to sabotage the election.  We know his agents and they were all visible and on scene, creating the mayhem.

Its Ingraham’s fault in so many ways.  What an ass!