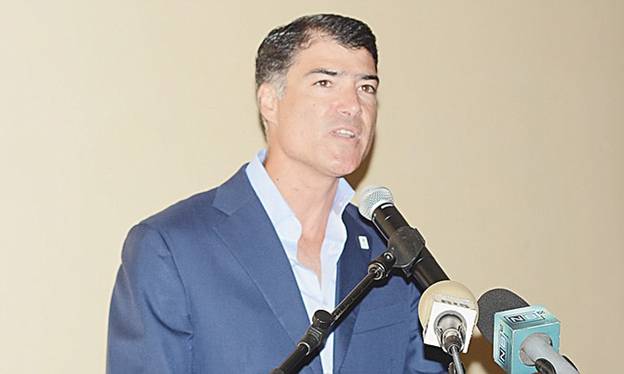 The fault, dear Brutus, is not in our stars. But in ourselves, that we are underlings

There are two mega hotel projects in New Providence.  One was built by Sol Kerzner who is somewhat of a legend in his time in The Bahamas.  He built Atlantis in the 1990s and by doing so transformed the old sleepy Paradise Island Resort into a world famous resort and donated and transformed the tourism market in The Bahamas. Now there is Bahamar, headed by a man named Sarkis Izmirlian.  Mr. Izmirlian is an Armenian Christian.  Mr. Kerzner a South African Jew.  The resort at Atlantis Paradise Island is hugely successful.  Bahamar is just trying to get off the ground and is having a hard time of it.
You are forced against the background of recent comments made by Sarkis Izmirlian at a Chamber of Commerce seminar on Thursday 16th April to make the comparison between the two fellows.  Mr. Izmirlian had this to say about The Bahamas and his project.  Remember now this is a man who had the fantastic idea to build this 2500 room, 3 billion dollars resort and it’s almost there but this is what he had to say:
“All of us must be concerned about the unfulfilled promise of improvement in the reliable supply of power and the reduced costs of power, we all should be concerned about the gap in necessary education and training programmes that would allow workers to be better prepared for jobs, and we all should be concerned that growth incentive commitments are not viewed as reliable,
The first thing is, this man Mr. Izmirlian has gotten this far because of the PLP and the government of The Bahamas.  When Hubert Ingraham, the former Prime Minister, sought to scuttle his project it was the PLP that helped to keep it alive.  He comes off now as an uncouth and ungrateful wretch.
There is an interesting lesson that can be pointed out to Sarkis Izmirlian about doing business in a small country.  One thing he can do is look to Sol Kerzner as an example of what to do and not to do.  One thing you do not do is get into a fight with the government of the day.  You may not like them but in public you need to get along.  What is it going to profit him to be having a public fight with the government?  It seems incredibly inept and stupid. He comes off as an arrogant prick who simply does not know his place.
The former Prime Minister Hubert Ingraham reportedly so despised him that he refused to deal with him at first saying: “I don’t speak to the boy, I speak to his pa.”  Mr. Izmirlian’s father is a resident in The Bahamas and is said to be the money brains behind the throne.
Second point is Sol Kerzner never got into a fight with his own contractor.  So not only is Mr. Izmirlian blaming the government for his inability to get his project off the ground in time but he is also blaming the contractor.  The contractor has said it is not its fault and no doubt when the whole story is told it may be that there is more here than meets the eye.  Again, the question is what does it profit Mr. Izmirlian to go into a new business having a fight with his contractor.
The lesson is this.  If the PLP loses office, we can assure you that no one is going to blame the advertising people, the public relations people, the branch chairmen of the PLP.  They are going to blame the leader of the PLP.  So take a lesson in that Mr. Izmirlian.  The fact that you cannot get your business started and up on time and on target has nothing as far as the public is concerned with your imaginary fight with the government or the fight with the contractor.  As far as the public is concerned that is the cost of doing business in a small country and you should have known what the heck you were getting into before you started.
So Mr. Izmirlian, the only person who is responsible for the failures of Bahamar is sad to say but true: yourself one Sarkis Izmirlian.
PrevPreviousJUNKANOO CARNIVAL IN FREEPORT
NextSANDRA EDGECOMBE’S FUNERALNext