KEVIN HART GETS A PORTRAIT 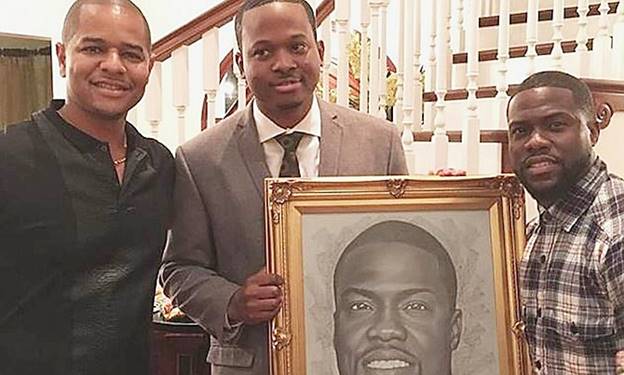 find CEO of Island Luck, view Jamaal Rolle and Kevin Hart with the specially commissioned portrait of the American actor and comedian.
” />

The Tribune reported as follows:

ONE OF the world’s top entertainers who is regarded as ‘the funniest man in America’ was almost stuck for a line when he was presented with a specially-commissioned portrait by Jamaal Rolle, aka The Celebrity Artist, recently.

Kevin Hart, the actor, comedian, writer and producer who starred in ‘About Last Night’ and currently is to be seen in ‘Real Husbands of Hollywood’ was in awe of the lifelike 16in x 20in portrait in a gold customised frame.

“Wow, this is incredible,” Mr. Hart said as Mr. Rolle, who is also The Tribune’s cartoonist, presented him with the portrait. “I have yet to see as much detail as I have with this portrait of anybody who has attempted a portrait of me. This is incredible.”

The portrait was commissioned by Island Luck CEO Sebas Bastian, who held a private event at the One & Only  Ocean Club, Paradise Island, and was impressed on seeing the portrait unveiled. “This is why I came to the best,” he said.

Mr. Rolle said he set out to “inspire happiness in people, to give them another perspective of themselves visually”. He said that, as an artist, to hear and see the excitement from Mr. Hart and Mr. Bastian was “a gift back to me, a reward that is priceless relished with my clientele”.