viagra sale help times;”>REMARKS BY HON. D. SHANE GIBSON, M.P., J.P.
MINISTER OF LABOUR AND NATIONAL INSURANCE AND MINISTER OF THE PUBLIC SERVICE
AT THE 104th SESSION OF THE INTERNATIONAL LABOUR CONFERENCE 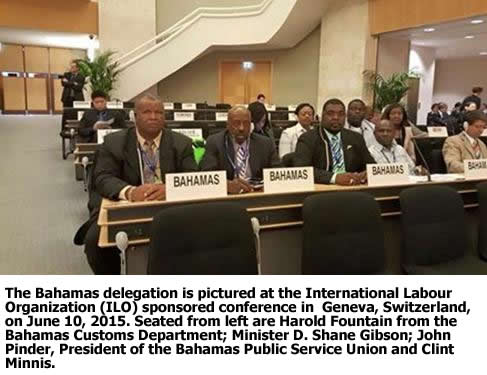 On behalf of the Government of the Commonwealth of The Bahamas, I congratulate you, Mr. President, and your Vice-Presidents on your election as Chairman and Vice-Chairmen, respectively, of this 104rd Conference. I am certain that colleague Ministers will join me in stating that under your able leadership this Session will be a most productive one.

Additionally I wish to, on behalf of the People of the Commonwealth of The Bahamas, express my thanks and appreciation to the Director General for visiting the Bahamas to attend the International Labour Organization’s 9th Caribbean Labour Ministers Meeting that was held in Nassau March 3rd – 4th, 2015. This historic visit was just another indication of the ILO’s commitment to the Caribbean Region. It was The Bahamas’ distinct privilege for the Director General to be present to witness Her Excellency Dame Margaret Pindling, Governor General of the Commonwealth of The Bahamas sign into law the National Tripartite Council Act 2014 on March 3rd 2015. Delegates would also be pleased to know that this new Act came into force on April 19, 2015 and the first official meeting of the National Tripartite Council was held on June 1, 2015.

In keeping with ILO principles, as well as, one of the decisions taken at the 9th ILO Caribbean Labour Ministers Meeting held in Nassau. The Government of the Bahamas, in conjunction with the Inter-American Development Bank has committed in its 2015-2016 National Budget, the sum of twenty million dollars toward the reduction in the level of Youth Unemployment. This new and innovative program is designed to identify at risk youth and provide these persons with training and capacity building – thus equipping them with new skills, and better preparing them to enter the labour market. It is envisioned that the Social Partners will collaborate with the Government in the implementation and execution of this program.

Mr. President and Distinguished Vice-Presidents, the Bahamas Chamber of Commerce and Employers Confederation in conjunction with the Ministry of Labour & National Insurance has, over the past few months, placed renewed focus on Capacity Building in an effort to reduce the skills gap in the country. This effort has yielded positive results, and it is anticipated that upcoming seminars and public meetings would benefit all stakeholders in ensuring that the Bahamian workforce acquire the skills to meet the demands of the labour market.

Mr. President and Distinguished Vice-Presidents, during the 103rd session, I informed delegates of a number of strategies that the government of The Bahamas has undertaken in keeping with ILO standards and best practices.

Firstly Mr. President, I am proud to report that the Occupational Health and Safety Unit in the Ministry of Labour & National Insurance is functioning and over the past twelve months has conducted numerous inspections both in Public and Private enterprises, aimed at reducing the amount of workplace accidents, industrial injuries and the loss of productive working hours. Additionally, a number of Health & Safety Inspectors have, in conjunction with the Pan American Health Organization, undergone a number of training sessions in the proper handling of hazardous material, and inspections in the construction industry. These initiatives will better prepare the experts to meet new challenges in their respective fields.

Secondly, I wish to report that the Bahamas Agricultural and Marine Science Institute (BAMSI) which was established to help to promote food security in The Bahamas, is now open and over 50 students have been enrolled. These students are now acquiring new skills and professional training in the fields of agriculture and marine science.

Mr. President and Distinguished Vice-Presidents Our Government, over the past twelve months, has also increased its focus on the advancement of the Disabled Community. We are the first country in the region to pass Disabilities Legislation. The Bahamas passed the “Persons with Disabilities (Equal Opportunities) Act in Parliament in July, 2014, which was gazetted on August 13, 2014, with certain provisions coming into force in October 2014. The National Commission for Disability was appointed on December 12, 2014, and the first meeting was held on January 30, 2015. This Act seeks to end discrimination against persons with Disabilities in the following areas: Housing, Accessibility to buildings, Parking, Health Care and Education & Training.

Mr. President and Vice-Presidents
We, in the region, anticipate a deepening of the excellent relationship with your administration as we work collaboratively to accomplish the goals set before us. To this end, I am pleased to announce that the Bahamas is actively participating in the “Regional Initiative: Latin American and the Caribbean Free of Child Labour.” This innovative instrument of cooperation involves 25 countries with a goal to accelerate, as a matter of urgency, the rate of elimination of child labour and provide a response to this very serious issue that plagues the Latin American and Caribbean region.

Mr. Director General, on behalf of the People of the Commonwealth of the Bahamas, I wish to join with other Caribbean States in thanking Dr. Giovanni Di Cola, the former Director of the ILO Office and Decent Work Team for The Caribbean, for his commitment and dedication to the region. It is hoped that as he executes his new duties here in Geneva, Dr. Di Cola would always remember the Caribbean, as we look forward to continuing to work with him to elevate both the quality and standard of living for the Peoples of the Caribbean.