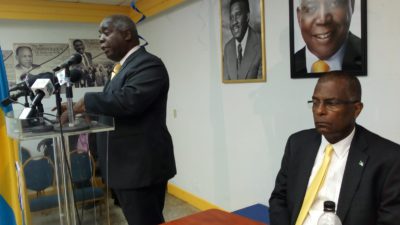 STATEMENT BY LEADER OF THE OPPOSITION

A pleasant good morning to all. Thank you media, supporters, those tuning in via the internet and a special hello to the great and resilient people of Cat Island, Rum Cay and Sal Salvador.

We were saddened by the news of the passing of Pastor Ed Allen, the founding pastor of Abundant Life Church. His passing marks the end of an era.

Our party always appreciated his strong biblical teachings and principles. He gave sound advice and counsel. He was a good example of going through the storms of life with dignity and grace. He was a trusted confidante and family relation of former PLP Leader Perry Christie.

The Bahamas is better off for his living amongst us.

We were equally saddened to learn of the passing of Lady Maynard yesterday morning.

The wife of former Deputy Prime Minister and Minister of Tourism, Sir Clement T. Maynard, Lady Maynard was a true matriarch of the Maynard family, a pillar of strength and the wind beneath Sir Clement’s wings as he worked tirelessly in public life on behalf of the nation.

A supporter of the progressive movement, the party thanks her for her selflessness in her support role in sharing Sir Clem with us, appreciative of the inherent associated challenges and the toll public life places on family life.

In her own right, she was a freedom fighter, particularly for women’s rights and in the arts. She followed in the footsteps of her own dear mother Meta Davis Cumberbatch as a patron and supporter of the arts and artists.

Lady Maynard has been faithful; she ran a good race and has gone on to receive her just and eternal reward.

On behalf of my parliamentary colleagues, Stalwart Councillors, officers, members and supporters of the Progressive Liberal Party and the progressive cause, I extend heartfelt condolences to the bereaved families and the religious community, especially the Brethren denomination.

May their souls rest in peace.

The IMF report does not accurately reflect what is actually happening in this country and the social pain which is being inflicted.  Their focus is purely on the national balance sheet.  The fiscal deficit and not the social deficit which continues to widen.

The successes of this economy have absolutely nothing to do with anything the FNM did. It boils down to two things: no hurricanes and the positive economic impact of the Baha Mar project. It is highly ironic that while in opposition, the FNM vehemently opposed the Baha Mar project and the proposal by the PLP to impose a hurricane levy to avoid fiscal disruptions from unforeseen natural disaster.

The FNM has now gone to Parliament to take funds from dormant bank accounts and an additional loan from IDB, to defray the cost of post hurricane repairs – in short, mechanisms that will not derail budgetary objectives; this was the objective of the proposed hurricane levy. So, all of their howling, the hypocrisy and flip flopping is continuously being exposed by their conduct.

The FNM itself has done nothing but claim credit for the PLPs’ work.

The FNM government has prided itself on fiscal discipline since coming to office, but a recent report by the Ministry of Finance had  indicated that the government had to revise its budgetary deficit by over $100 million for the year ending 2018.

This is extraordinary in the face of over $2 billion borrowed to date; a 60% hike Value Added Tax (VAT – which by the way has resulted in only a 19% increase in tax receipts); the separation of thousands of government workers that the government claims will accrue $70 million in cost savings; drastic cutbacks on the capital expenditure account and no hurricanes or natural disasters to disrupt budgetary allocations.  This is extraordinary.

The empirical data available to the public to date strongly suggest that the country’s public finances are being poorly managed – and I dare say – mismanaged. I fear that the fiscal performance of the government will only get worse because the “balance sheet” focus and approach by this government in the absence of a pro-growth economic strategy is unsustainable in the face of a growing population with increased demands on public goods and services and downward pressure on operational expenditure.

I point out yet again that the PLP’s short and medium term fiscal consolidation plan produced significant reductions in our budget deficit during 2012 – 2017, only to be disrupted by two major hurricanes in 2015 and 2016.   Take a look at the numbers.

THE COMPENDIUM OF FINANCIAL BILLS

As many of you are aware, a compendium of financial services bills were passed in the Senate last evening. The PLP Senators abstained on three of the bills: Preferential Exemptions, Register of Beneficial Ownership Bill, Commercial Entities (Substance Requirements) Bill 2018.

The PLP voted against The Penal Code Amendment Bill.

In my view, this is 2000 all over again. We recall how former Prime Minister Ingraham sent a compendium of Financial Bills from Washington and compelled the House to pass them forthwith. Parliamentarians had not seen them before or had an opportunity to consult on them.

I made the point in the Lower House about the reputational damage and extraordinary costs to persons who inadvertently fill out customs forms in a manner that could be perceived as tax evasion and are called in by the relevant authorities.

Upon properly explaining their intent, the police, as they often do, will determine that the courts should sort this out. The person charged may very well win their court case, but at what cost to their personal reputation, good name, job security and pocket book?

Labour in this country is in a state of crisis and the government seems impotent and paralyzed to decisively address and resolve them. Maybe they are not focused; perhaps they do not know what to do, or they are simply tone deaf because they simply do not care.

I note that the strike vote taken by the nurses earlier this month, on the 4th of Dec 2018, was the second strike vote in three months by healthcare professionals.

Well, over 400 nurses voted overwhelmingly in favour of a strike. Nurses were locked in negotiations with the Public Hospital Authority over plans to implement a new shift system with no resolution in sight.

Additionally, 115 Senior doctors of the Consultant Physicians Staff Association (CPSA) withdrew their professional services from the PHA’s network of healthcare facilities on 28th November 2018, returning to work on Thursday, 6th December 2018. Health facilities and related services impacted include the Princess Margaret Hospital here in Nassau, the Rand Memorial Hospital in Freeport and public health clinics across the country.

We learned just yesterday that the teachers are moving ahead with industrial action against the government with a successful strike vote because too many workplace issues remain unaddressed.

In a recent IDB report, the chief Permanent Secretary is quoted describing senior officers as “extraordinarily weak.” The government remains silent in the face of this attack on the public service, ostensibly hoping it all blows over and go away. Given the critical role of the civil service in executing all pieces of legislation and public policy, the Prime Minister must address this issue. Does the political directorate have confidence in the civil service? Does the government share the views of the Secretary to the Cabinet?

In eighteen months of governance, the FNM government has remained in reaction mode, reacting to one crisis after the other, with little success, if any, to show for their efforts. The Prime Minister complained to the media that some of the labour issues were over fifteen years old. Is that not all the more reason for a government to have a plan of action to pro-actively offset these various industrial fall outs? The Prime Minister certainly had sufficient time to study the issues and formulate a plan of action.

The labour issues that have reached crisis levels are just symptomatic of a broader issue or the malady that infects this government: They are long on rhetoric, PR and describing problems, but short on executing a strategic plan of action to address and resolve problems. The FNM was simply not ready to govern and they find a way to prove this to the Bahamian people day after day.

As a matter of fact, none of the major issues on which the FNM campaigned or the issues that matter to Bahamians have been successfully addressed and resolved. This is incredible.

No jobs have been created and no economic activity has been created in Grand Bahama, the island the FNM calls FNM Country. The purchase of the Grand Lucayan has resulted in the loss of jobs, not the addition of jobs with the government reneging on and walking back almost every promise they made surrounding this property. The Prime Minister said that the economic resurgence of Grand Bahama was a priority, but to date, he has nothing to show for his efforts.

Energy sector reform is another important issue to Bahamians. The cost of energy is too high and is preventing our economy from becoming globally competitive and contributing to the high cost of living.

Reducing the cost of energy is a game changer for our economy and the quality of life for average Bahamians but to date the government has delivered political interference; a promised investigation that has not materialized; a failed and expensive voluntary separation program that depleted the corporation of critical skillsets, competencies and organizational memory; a walk back of the voluntary separation program through rehiring; four fires that resulted in the loss of more than 100 megawatts in power generation capacity; and warnings of increases in electricity bill to as much as 70%. .

There is no clear vision for energy reform – just in-fighting, interference, cover-ups and cronyism all at the expense and inconvenience of a very dissatisfied and disgruntled customer base. Needless to say, this does not engender public confidence in either BPL or the political directorate charged with the beleaguered corporation’s superintendence and now we take note of the action being  initiated by the former chair.

Ladies and gentlemen, these last 18 months has shown us that this government has a total lack of empathy for Bahamians. Their motive is not to represent the people but rather to wheel and deal to enrich themselves through sweetheart contracts like OBAN, the town centre mall, the fast ferry mailboat service and the 1.8 Million Ministry of Health cleaning contract. And what is so utterly shocking is that, in certain circumstances, contracts have been given to companies where, it appears, the Prime Minister may have a direct financial interest. FNM transparency at its best!!

Their lack of preparedness to govern is even more evident as they continue to lie and misrepresent the true intention, their fiscal policies and their vile and sinister attempt to rewrite the history and contributions of the PLP and its National Heroes.  They have demonstrated in these 18 months that their true agenda is a “FNM first” mentality and that it was never about you the people.

This Christmas will be bleak one for many, but I pray God’s blessing on all the people of this great Bahama land. I want to thank the media for their continuous support in covering our press conferences and wish all Bahamians across the length and breadth of this fair commonwealth, a very Merry Christmas and a safe, happy and prosperous 2019.

PrevPreviousTHE PASSING OF SHEILA ROLLE (THERE MUST BE YOUNG PEOPLE IN THE ROOM)
NextBahamasair Strands The Leader Of The Opposition in Ft. LauderdaleNext