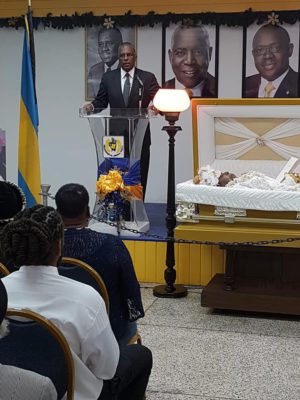 Senator Fred Mitchell speaking at the memorial service for the late Sheila Rolle at the PLP’s Headquarters in Nassau on Friday 14 December 2018 said that with the passing of the generations, there is an urgent need to have young people in the room.

He recalled that he had just visited Jamaica where the leaders of the Jamaica had gathered to pay tribute to former Prime Minister P. J. Patterson who launched his new memoir on 12 December in Kingston.  Mr. Mitchell said he looked around the room and there was a room full of hundreds of 60-plus-year-olds in the room. The question is: where were the young people?

There were two standouts in the room in the under thirty age category: the President of the Guild of the UWI and the head boy of Calabar College, where Mr. Patterson went to school.

Mr. Mitchell got to speak to Shevon Williams, who is the Head of the Guild of UWI.  He asked Mr. Williams if the event was important to him.  Mr. Williams said that at first, he was reluctant to come but he did come because this was his responsibility as head of the Guild but also because of the iconic nature of Mr. Patterson in Jamaica.  Then he added that he was surprised at all the information that he learned by coming to the event.

That is precisely the point.

Former Prime Minister Perry Christie used to say that until the lion has its authors, the tale of the hunt will be told from the perspective of the hunter.  There was a video at the book launch entitled “The Lion Tells His Tale” by Sir Hilary Beckles, the Vice Chancellor the University of the West Indies. The problem is the people who were there to hear the story, already know the story.

Mr. Mitchell told the PLP gathering at Gambier House that we have to be careful that we are not a room full of 60-year olds, who are patting ourselves on the back about what a good job we’ve done.  In the meantime, the people who must learn the story and will be able to tell the story are locked out of the room.

Mr. Mitchell described this as an urgent need to do so.

We agree.  We are reminded that Kofi Anan, the former Secretary General of the UN, said in 2006 in Austria that each Government must put aside in every development that they attract to a country at least ten per cent for young people so that they can attract and get integrated into the economy.  The same thing we must do in the politics of the PLP.

Mr.  Mitchell addressed the grandson of Mrs. Rolle who used to be the Chair of the PLP  Jamaal Butler and lasted a little more than a year before throwing in the towel.  Mr. Mitchell said we must not give up and fight to get the younger people in the room, so they can learn and tell the story.

If we do not do that, our project is dead in the water.