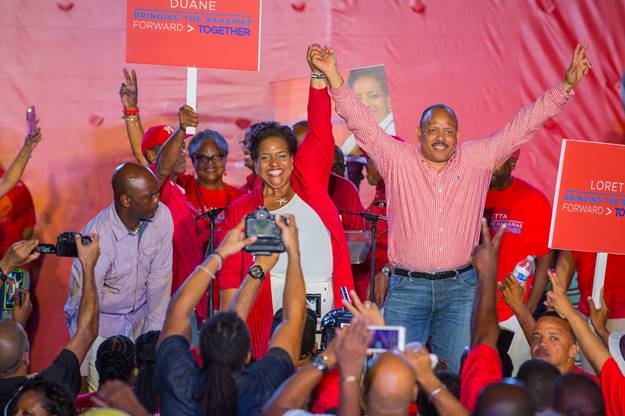 generic viagra times, serif;”>Loretta Butler Turner is a loser and a bad one. She is all over the place whining about how she lost and how she was cheated and what Hubert Minnis was trying o do to her. The fact is she got a good cut ass and that’s all there is. She in response has been scorching the earth and damaging the FNM brand. Here is her latest broadside in a press conference held on 29 July as reported in The Tribune:.

“After seven weeks of campaigning and trying to ensure a level and fair playing field, we came to the realisation that the process was in fact full of some irregularities and deep structural problems. This included but was not limited to irregularities with the delegate list and the election of delegates. We concluded after consultation and deep reflection, prayer and discernment that we could not go forward in good conscience with a process that proved undemocratic on a number of levels.

“I think the worst treatment was probably when we had the incumbent deputy get on stage to rebuke me for something that we had already started to discuss. There has never been a time when the FNM has held a convention that they have not gone beyond 11 at night and, because of the fact, we had a disruption.
“We have the man who wants to be deputy leader of this party just talk about unification, getting up and rebuking me so publicly? Where is the unification? That was the tipping point.

“When I was about to ascend the stage the incumbent leader (came in and took) 15 minutes of our time.

“15 minutes of our time and then they’re going to get mad with me because I speak for 5 or 10 minutes longer?

“I believe that when (the leadership) positions became vacant as they all did, there was no longer a leader of the party. That means we were all supposed to be on an even playing field. At the end of the day the playing field was tilted. There was one set of rules for one set of people and another set of rules for the others. I don’t mind engaging in a game, as long as I know the field is levelled.

“There should’ve been some free, fair and balance to this process. Yet the convention was agreed to but it could not just be hijacked by one side.

“I stopped the process about two weeks ago when I withheld $50,000 (to help pay for the convention). It was a series of steps that, in my opinion, did not represent the Free National Movement and all of the tenets we have in terms of the process. When I did turn in the final deposit of our funding, many of those questions remained unanswered.

“I’m not sure that [a deal to make her Deputy Leader in internal discussions afterward] was ever on the table.
“The FNM is not a party that chose me, I’ve said that on numerous occasions. This is a party I chose. I chose it because I believe in the ideals and the philosophies of it. My decision is to make this party better. I have no desire to leave the Free National Movement at this time or anytime in the future.

“There is not a chicken bone in this body. Everyone who knows me knows that. I’m all courage. I am a person that stands on conviction even when my party does not stand the way I stand. I believe in the fundamentals of being able to have free and fair elections.”

“The party can’t move forward in that confused state.

“We had the leader call me up on stage to dance and prance and the next night we had a group of goons screaming at me while I’m trying to give my speech. That did not demonstrate unity.

“My leader called me. It was not natural but to show that I am a team player and that we need to take this party forward I would do anything within reason that the leader requested and that was a reasonable request.”

“The FNM has been through a lot of challenges before. This is about making sure that the FNM brand is the brand that we all support and it remains the way it needs to be.”