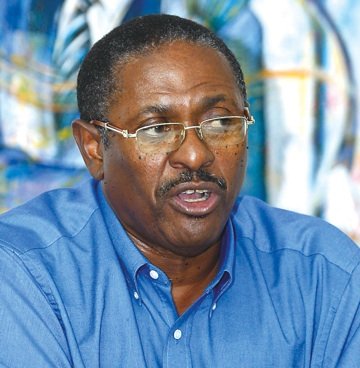 For someone who wants to lead a party and government, Loretta Butler-Turner has a record of mediocrity but has done much to deeply fracture her party by sowing seeds of discord that will linger long after the FNM’s current three day convention.

No amount of political bluster, lies and half-truths from a rally stage by Mrs. Butler-Turner can change the fact that she sat around the cabinet table approving terrible and harmful policy decisions that pushed this country’s economy to the brink of collapse.

Her complaint about foreign workers on job sites is hypocritical as she approved 8,000 foreigners on one job site when she last sat in the cabinet.

The jobs training program designed by the PLP involves the National Training Agency and corporate partners. The model program is the Grand Bahama Shipyard where 600 workers on work permits will be replaced by young well trained Bahamians. There is accountability and transparency in the PLP’s jobs training program, unlike Loretta Butler-Turner’s inspired 52-week jobs program. To date the FNM could not explain who were trained, in what vocation and under which certification authority.

Like Hubert Ingraham before her, Mrs. Butler-Turner is dead wrong on Baha Mar. She knows better but continues to spew clutter because of her contempt for the Bahamian people. The fact of the matter is Prime Minister Christie found a solution to complete Baha Mar but the developer led Baha Mar into bankruptcy. Further, both the Delaware and Bahamas courts agreed with the Bahamas government that that Baha Mar is a Bahamian asset and all disputes related to it should be resolved in The Bahamas jurisdiction under Bahamian law. Further, the developer is on record in official court documents that he could not finish the project and intended to downsize the operations to a 52 man skeleton workforce. The provisional liquidation process was the best option under those circumstances.

On the issue of crime, Loretta Butler-Turner’s strategy resulted in a doubling of the murder rate and a 50% increase in crime generally in just five years. This is the worst record in documented history. The cancellation of Urban Renewal seriously hurt and impaired the country’s crime fighting efforts and adversely impacted thousands of Bahamian families. Under the PLP, crime is trending downward, but there is much work to do. Swift Justice is working, cases are being brought to trial more quickly, there are 10 new criminal courts in operation and the backlog of cases are steadily decreasing. On the issue of corruption, crime and attention being paid to criminals, I have only three names: John Bostwick, Fred Ramsey and Michael Pintard.

HER ATTACKS ON THE PLP ARE LAUGHABLE AS THE PLP CAN SHOW WORKABLE AND WORKING STRATEGIC PLANS TO ADDRESS THE MYRIADS OF COMPLEX CHALLENGES FACING THE BAHAMAS. LORETTA BUTLER-TURNER’S FNM CANNOT DO THE SAME. SHE CAN DEFLECT…SHE IS GOOD AT POLITICAL BLUSTER, MISLEADING THE PUBLIC, STEALING PLP POLICIES AND VITRIOL, BUT SHE HAS NOT ARTICULATED VIABLE PLANS.

As a cabinet minister, Butler-Turner was decidedly ineffective in her specific portfolio. How many pieces of pending legislation did she table and have passed into law? What is her legacy on welfare reform? What about equal opportunities for persons with disabilities and advancing the cause for family and child protection? She has precious little to show for her time as an executive and administrator in the FNM cabinet. Most of the major reforms and strides in the areas of social and community development, family and child protection and advancements in modernizing the system to provide greater efficiency, more accountability and preservation of the dignity of clients came to fruition within the last four years under the leadership of the Hon. Melanie Griffin.

It is clear that Butler-Turner’s blind ambition to become Prime Minister eclipses her ability and capacity to get things done. Her record of undermining leadership, sowing seeds of discord and a lackluster record as a cabinet executive are all transparent testaments to mediocrity and are sure to hold her accountable in the court of public opinion.

I watched Peter Turnquest tonight struggle to deliver a speech mostly on health infrastructure that Dr. Minnis probably wrote for him.

In doing so, Peter Turnquest and the FNM must not re-write history because of that organization’s failure to generate messaging to capture the attention of the Bahamian people. They should instead apologize to the Bahamian people for the dismal state they left this country in, not just in 2012 but also in 2002.

This is the same wrecking crew who opposed national youth service and who two decades later canceled Urban Renewal as a testament to their crime fighting legacy.

This is the same crew who butchered the original plans for Baha Mar, spitefully scared away investors, putting the country in the dilemma of faulty deals on the eve of the worst recession since the great depression because they lacked a coherent investment policy. The result was a disaster with record debt, record unemployment and an economy in a “wheelchair” where the misery index was off the charts.

They deceitfully return with variations of PLP policies. It is the PLP under the leadership of Perry Christie, who stopped the patch work efforts of a former government, which allowed cabinet ministers and their cronies to be enriched while infrastructural work, from roads to roofs, yes even at the RAND hospital, was subpar.

This Progressive Liberal Party government has had an unmatched legislative agenda. It has made difficult decisions to rescue our economy, and has laid the framework for a secure future. This country will have its University of The Bahamas, to complement BAMSI, where we are finally addressing food security while expanding key industries. Instead of a wing here and a wing there, the entire health system throughout our country is being modernized in preparation for National Health Insurance, complete with a brand new hospital in Freeport. And Baha Mar, along with other boutique type properties throughout the Commonwealth of The Bahamas, will open, and provide much needed jobs, and economic injection all over this land.

Freeport and Grand Bahama by extension are poised to become the crown jewels of this administration’s work. We do not need the FNM talking about bringing the magic back – they can keep their voo-doo! Restoration is on the way, following another bold decision to properly address the expired concessions of the Hawksbill Creek Agreement. Oddly, it will be the constituency of the now Deputy Leader of the FNM, which will benefit in the most dynamic way. But we will keep the details for now. Thanks to the vision and political will of Prime Minister Christie and the hard work of his Minister for Grand Bahama, Hon, Michael Darville and his team – Grand Bahama – once considered FNM country, will realize its full potential from the impact of multiple investments in various stages of development.

Employment and training programs for residents of that Island and a robust economy will continue to be the hallmark of a committed PLP Government because we believe in The Bahamas.

We are undeterred by our detractors, spewing forth lies, half truths and bluster as we work to realize real progress for our people.