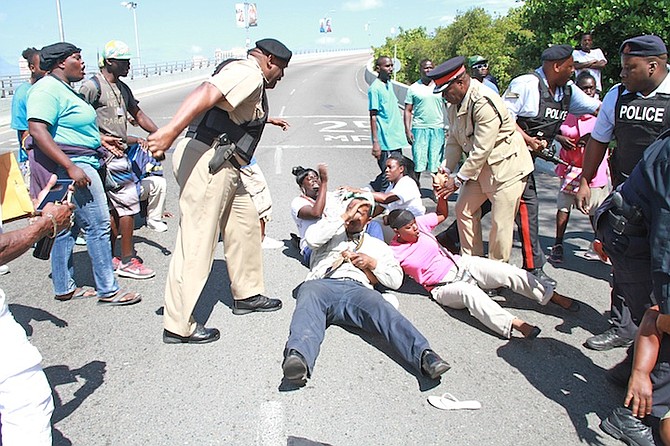 We did it to ourselves. The photos looked awful. There were our people, sildenafil stuff the poor and the oppressed, buy viagra the vendors and the hair braiders sitting on the Sidney Poitier Bridge for Christ’s sake and being dragged off by policemen. One video seemed to show a police man using his foot and kicking one of the protestors in the head.

The morning was 1 March and the vendors had had enough. Their livelihood was under threat. It helped that they had an FNM lawyer in Halson Moultrie and one of the organizers of the vendors was FNM.

Paradise Island who sold the easement to a new buyer insisted that the contract was done with the permission and leave of the government and there was nothing to talk about. The 60 day surcease to which they had agreed was over and the vendors would not be allowed on the beach. The vendors blocked the bridge.

The question we ask is how long in that pouring hot sun that morning could those vendors have lasted on that bridge. If an hour and half that would have been plenty. There is another bridge, so why could the second bridge not have been opened, with two way traffic and let the protestors sit there on the old bridge. Stop anyone from giving them water and sustenance and see how long they would last. Infinitely more acceptable than pictures of police dragging protestors from the bridge.

No PLP politician showed up and said a word. The police handled the thing.

The Minister of Tourism Obie Wilchcombe was of course in the meanwhile working overtime to get it resolved and with the intervention of the Prime Minster, the owners agreed on another 60 day extension.

Let’s make this clear. The extension should be permanent. Pindling’s PLP would have simply acquired the right and told the company take it or leave it. The response should be vigorous with these commercial interests who are bloody minded.

As a matter of fact we go further and say that what is needed is a comprehensive act which creates easements across all private land for beaches, with a compensation fund to deal with any claims that private property has been compulsorily acquired. That’s the direction to go in.

Those photos of policemen dragging protestors from the bridge seemed to suggest that we had lost our moorings that we do indeed live in bubble and if that is so, we are in deep trouble.

Many were simply troubled by it.

PrevPreviousTHE FNM HAS A PROBLEM
NextBRADLEY ROBERTS ON THE PROTESTORSNext