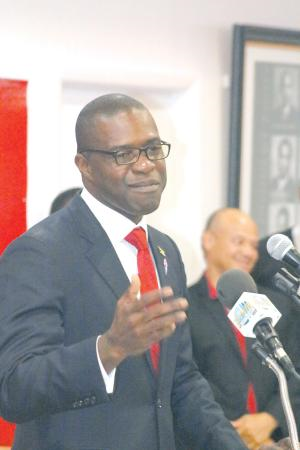 Ellsworth Johnson, the Minister of State for Legal Affairs in the Attorney General’s office was in the press last week purporting to answer the letter written by the Leader of the PLP Philip Davis to the Prime Minister to discuss the matters involving the slave shaming of his colleagues former Senator Frank Smith and former Minister Ken Dorsett.  The FNM partisans are saying that they have a total of six other PLP former Ministers in their sights.  Mr. Davis said that the practices of carrying people to court who were not a flight risk was slave shaming. And should be stopped and is certainly deplored.  Poor Dr. Hubert Minnis, the Prime Minister got into a bit of trouble when he was asked about the letter and he said that no he would not meet with Mr. Davis and the answer was “No” which he then spelled “NPO”.  Dumb as a cluck.  He was the laughing stock of the country.  But it was left to Mr. Johnson it appears to give an answer.  He cautioned the PLP not to enter into commentary about the cases.  He claimed that the FNM was being brave by initiating the prosecutions.  No sir, the FNM was being cowardly and sniveling and worthless.  They are letting the police do their political work, while hiding behind the rule of law.  Bunch of nasty worthless people.  Bottom line is who the hell are you to be answering Brave Davis?  Go sit down. Brave Davis don’t play with chirrun.