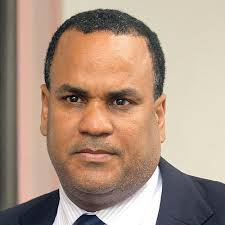 The FNM Government is trying to fire Simon Wilson as the Financial Secretary. They have been sued in the courts for making a false case against him.  It turns out that it is based on a phony report by an American firm FTI whose report was laid in the House of Assembly last week on a day when the FNM had no business to transact.  The press keeps calling it the auditor general’s report but it turns out it was not that at all. This was an attempt by Peter Turnquest and the FNM to sully the name of Simon Wilson at a time when they had to put in a defence to their false accusations against him. They used the cover of parliamentary privilege to sully the man’s name.  Michael Halkitas answered the allegation in which it appeared that Mr. Wilson from this phony report was saying that he was pressured into signing a politically inspired contact by a senior political figure.

Former Minister of State for Finance

On Allegations Made in the House of Assembly

I have seen newspaper reports of the tabling in the House of Assembly on Wednesday October 17th, 2018 of findings of one FTI Consulting into certain contracts entered into by the Ministry of Finance.

Having now had the opportunity to read the findings, I can now offer the following comments on XUA Company Lease-to-own Agreement.

Firstly, what was tabled in the Parliament is not an audit report of the Auditor General.

It is the findings of an accounting firm, FTI Consulting that was engaged by the Auditor General to perform certain investigations.
Apparently FTI examined a number of contracts and zeroed in on two in particular.

In the normal course of events, the Auditor General would examine the findings, conduct further enquiries, including interviews with individuals named in the findings, to give these individuals to defend their actions and to determine if these findings have merit; conclude his report and transmit that report to the Speaker of the House of Assembly for tabling.

What has happened here is a short circuiting of the system with the unfortunate consequence that private citizens and public servants are disparaged.

The press has reported on alleged “political pressure” put on the Mr. Simon Wilson, Financial Secretary to enter into a contract with XUA.

However, on page 9 of the findings, Mr. Simon Wilson, explicitly denies that any political pressure was put on him to issue any contract.

Every minister, past and present would routinely meet with citizens on any number of issues whether it be complaints about government services, seeking employment or seeking business opportunities with government.

These citizens are often referred by them to public officials. This is a part of the job of ministers and elected officials and is in no way unusual.

So, the issue of political pressure does not arise.

Additionally, having conducted this witch hunt; the findings, on page 9, quotes the Acting Financial Secretary Marlon Johnson as follows:

“Nonetheless, Johnson acknowledged a need in the public service for the equipment that was sourced and cited a finding by the Ministry of Finance that the costs for the goods are within the range of their open market retail value.”

Further, on page 15 of the findings it states: Further he
recommended that the Ministry of Finance honor the contract terms.

In effect, the Ministry of Finance under the FNM honored the contract and paid the sums due.

Surely if there was wrongdoing, this FNM administration would not have honoured the contract. In fact, they have an unmatched record of cancelling contracts of Bahamians.

In my view, the timing of the release of these findings has less to do with wrongdoing and more to do with an upcoming legal matter between the Government of The Bahamas and one of the individuals and Mr Wilson.

Further….it is a deflection from post office etc etc all the woes of the Bahamian people.