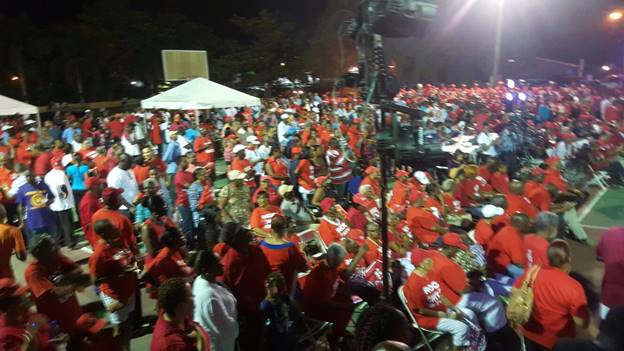 A picture says a thousand words so the saying goes and that must have been the thinking of both Dr. Hubert Minnis, Leader of the FNM and Loretta Butler Turner FNM MP and insurgent candidate for Leader of the FNM when they launched their campaigns for the office on Thursday 7th July.  They went head to head and one supposes it was to be the battle of the crowds.

The crowds don’t vote.  We are told that some 280 delegates will vote on who is to lead the party.  So what was the crowd business all about? The idea we are told is that Dr. Minnis wants to show that he has grass roots support and that those who were wavering needed to see that he is the candidate who can deliver the masses of the people.  He says he is from the poor and represents the poor.

Brent Symonette, the former Deputy Prime Minister, and agent provocateur in this whole leadership process, told Dr. Minnis to cut the crap in our words not his.  He said a man who lives in a gated community like Dr. Minnis with 24 hour security, can’t be serious about representing the poor.  But then he Mr. Symonette is the ventriloquist to Mrs. Butler as the dummy in this struggle, so the FNMs say.

Hubert Ingraham, the former Prime Minister, was nowhere in sight as the two candidates went picnicking on each other and the direction they wished to take their party when they face off for the second time in six months at the July convention of  the FNM.  He was winging his way to Trinidad to a funeral for the late Patrick Manning and no doubt being good at studied indifference.  You can be sure though he is somewhere behind with all the machinations that is involved.

The PLPs loved all of this. It looks like the FNM is falling apart in the vicious fight for the heart and soul of the party.  The more they talked about one another, the better the tag lines the PLP has for the general election.

Now about the PLP, here is the point we think the PLPs should take from all of this.  Not that the FNM is fighting; that is the obvious point.  The point is that Dr. Minnis knows he has Loretta Butler Turner licked.  Unless Hubert Ingraham himself intervenes and enters the race, Dr. Minnis will emerge as Leader of the FNM again.  So this is the fellow who will fight the general election against the PLP.

Many people think he is unelectable.  He can’t pivot on is feet; he doesn’t know what to say; he is clueless when it comes to being politically savvy.  But what he has from this rally is the organizational ability it appears.  And he is using that ability not to go after the whites and the elites who will go with him anyway because they belong lock stock and barrel to the FNM, but he is going at the PLPs base.  That is what the PLP should be concerned about, the attempted raid on its base. We think his whole rally strategy has to do with getting the PLP’s base to respond to him.