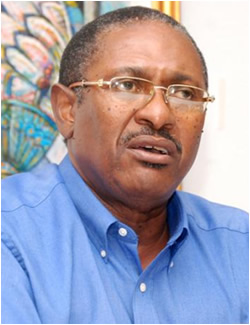 STATEMENT
BY
BRADLEY B. ROBERTS

MINNIS STANDS ON A SHAKY FOUNDATION OF BROKEN PROMISES AND

I was asked by the Press to comment on the FNM Government Speech from the Throne which supplements the immediate comments of the Leader of The Opposition Hon Philip Brave Davis MP.

Dr. Minnis is beginning his term in office on a losing wicket because he deceived the Bahamian people when he campaigned on promises to “REPEAL” VAT on Electricity, health care services and breadbasket items only to back-peddle and move away from those campaign promises in the Speech from the Throne after duping tens of thousands of Bahamian voters into supporting the FNM. He stands on a shaky foundation of broken promises and electoral deceit.

THESE BROKEN PROMISES REPRESENT ELECTORAL FRAUD OF THE WORST KIND. MINNIS’ MESSAGE TO THE BAHAMIAN ELECTORATE WAS FAKE NEWS ALL ALONG.

His very public and ill-conceived alignment with disgruntled foreign investor Sarkis Izmerlian who has inserted himself into the politics of The Bahamas with aid and comfort from Minnis and the FNM, raises questions about the FNM’s spurious slogan, the people’s time. We ask again, “which people?”

Further, as significant as Baha Mar is to the economy of The Bahamas and was to the Minnis election campaign message, an FNM policy on Baha Mar was noticeably absent from the Speech from the Throne. Why was that? Did Minnis still not want to offend one foreigner after receiving an overwhelming electoral mandate from tens of thousands of Bahamians? Why is that?

DID DR. MINNIS SELL THE COUNTRY OUT TO SARKIS IZMERLIAN AND FOR WHAT PRICE?

The PLP promised to place a cap on the interests and fees charged to civil servants who secure loans from local commercial banks on salary deductions. This policy proposal will benefit tens of thousands of Bahamians and protect them from onerous and burdensome bank fees. The PLP publicly challenges the FNM government to adopt and implement this policy because after all, it is the people’s time.

Bahamians must feel that government policies benefit the masses and not the privileged few at the expense of the masses.

Other noticeable policy absentees from the Speech from the Throne were energy reform, food security, and the very important plans for the economic recovery of Grand Bahama. What is the policy of the FNM on the sale of the three hotels in Lucaya, a new casino operator, duty free concessions for businesses in east and west Grand Bahama and the cruise port for East Grand Bahama? The PLP government left a strong foundation of progress for Grand Bahama’s future with several projects in the advanced stages of development.

The people of Grand Bahama gave the FNM all five seats but the Minnis government has offered only a promise to repeal investment incentives, returning Grand Bahama to the status quo that stood at the root of that island’s economic stagnation for far too long. If the FNM has a plan for the future growth and development of Grand Bahama, the people must hear it from Minnis. To date, the FNM appears not to have a plan for Grand Bahama. That is sad! That is unfortunate! A mandate to govern, but no plan.

We look forward to a spirited budget debate – a “REAL WORLD” exercise where the proverbial rubber meets the road – and we all can finally move away from political rhetoric, bluster, posturing and fake news and focus on the realities of governance.