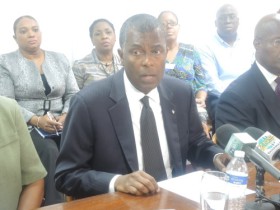 20th July 2015
buy cialis pilule times;”> “One of the things I do want to stress though in particular is one of the reasons that this fee has been implemented for emergencies is to try and eliminate any suggestion or attempt to offer money to people on the side to get this process advanced.”

troche times;”>The Bahamas Foreign Affairs Minister revealed just one of the reasons for the contentious $200 emergency passport processing fee at a press conference held on Monday at the Passport Office to update the public on the status of the processing of what he described as a “deluge” of passport applications, numbering some 6,500 in New Providence alone and over 1,500 in Grand Bahama. Mitchell was hopeful however that by the electronic passport deadline of the 15th November, the backlog would be under control.

“I’m having people constantly walk up to me and say ‘well you know somebody told me if I give so and so or if I do so and so’ – this is the case. I want people to know that these regulations exist. The fees are there (and) if you require the passport on an emergency basis the fees are there to deal with that. You do not have to pay anyone any extra sums of money and do not do so and no one is authorized to solicit any funding on the side for the production of this passport.”

At the heart of much of the continuing public commentary surrounding these new passport regulations and vexing backlog is this $200 fee for emergency processing after the effective date of the new regulations of the 9th July 2015. The government has come under criticism in various quarters for “cashing in” on the processing of passports, which the Minister has publicly denied.

As for persons who have attempted to pressure the Minister into a possible waiver of the emergency processing fee, Minister Mitchell was adamant that the regulations are quite strict and that barring a medical emergency, a ministerial fee waiver was not possible in law.

The Minister also pointed out that the $200 emergency processing fee applies across the board throughout the Bahamas and in Bahamian Consulates and offices overseas. When asked if applicants are availing themselves of this service, Acting Chief Passport Officer Tinker indicated that to date, the passport office has collected in excess of $24,000 in emergency processing fees.

To cope with the huge backlog of passport applications, staff members were brought in from the Ministry of Foreign Affairs to assist the employees at the passport office and they have had to work overtime after normal working hours, sometimes as late as 10:00 pm. The Minister said that an application for overtime funding is in the Ministry of Finance for approval.

“The date for normal issuance (of a passport) is twelve weeks of the date of application and the forty-eight hour period (for emergency passport processing) begins once approvals have been obtained from Nassau and the same applies to Grand Bahama” reiterated Minister Mitchell,  commenting on the processing timelines.