MITCHELL AT THE UN 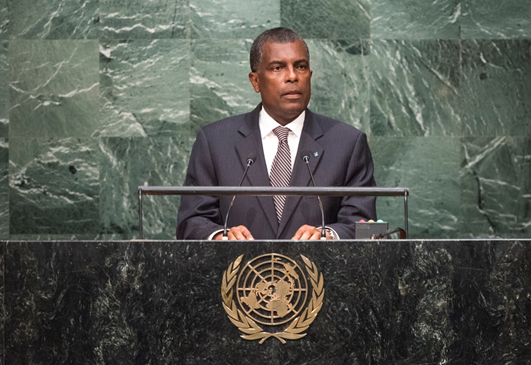 cialis usa viagra times;”>Click here for the full statement of the Minister

salve times;”>NEW YORK — Under the theme, “The UN at 70: A New Commitment to Action”, the Minister of Foreign Affairs and Immigration of the Commonwealth of The Bahamas, The Hon. Frederick A. Mitchell, presented a statement on behalf of The Bahamas during the General Debate of the Seventieth Session of the United Nations on Thursday evening, October 1, 2015.

In the statement to the General Assembly, Minister Mitchell spoke to world leaders, parliamentarians, diplomats and other distinguished persons gathered in the General Assembly Hall of the United Nations Headquarters about those matters of import to The Bahamas. These matters included crime and security, the environment and climate change, the global refugee/migration crisis, the scales of assessment for peacekeeping operations and The Bahamas’ bid to the Human Rights Council.

Regarding crime and violence, Minister Mitchell informed of the adverse effects illicit trafficking in small arms into The Bahamas has had upon the society and urged the producers of these weapons to assist in ending their illegal movement.

Citing the passage of the major storm, Hurricane Joaquin, Minister Mitchell underlined that climate change is a real and present threat to The Bahamas. In this connection, he welcomed the launching of a new initiative that is anticipated, among others, would address climate change issues.

The Minister reaffirmed that The Bahamas remains fully committed to meeting its financial obligations to the United Nations. He urged that the organisation’s scale of assessment for peacekeeping operations take into account the peculiar vulnerabilities of small island developing states like The Bahamas.

Minister Mitchell informed the assembly that The Bahamas is at present energetically seeking a seat on the Human Rights Council, elections for which are scheduled to be held at the end of October 2015. The Human Rights Council is the United Nations inter-governmental body responsible for the promotion and protection of all human rights around the globe.

Minister Mitchell described The Bahamas as a country deeply committed to the respect and protection of human rights. Further, he explained that the main objective of this historic Bahamas undertaking is to promote diversity and inclusiveness, from small island state perspective, in the advancement of human rights and the consideration of global rights issues. The Minister requested the support of United Nations member states for The Bahamas bid.

The General Debate of the Seventieth Session of the United Nations, which began on Tuesday, 28 September 2015 and has received statement from leaders worldwide, was immediately preceded by an address to the United Nations General Assembly on 25 September 2015 by His Holiness Pope Francis and the Summit for the Adoption of the Post-2015 Development Agenda, convened 25-27 September 2015 and attended by the Prime Minister of The Bahamas, the Rt. Honourable Perry G. Christie. The General Debate is scheduled to close on Tuesday, 6 October 2105.

Frederick A. Mitchell, Minister for Foreign Affairs and Immigration, addresses the general debate of the General Assembly’s seventieth session October 1, 2015 at  the United Nations in New York.