WHAT BRAN MCCARTNEY SAID ON 30 SEPTEMBER

cialis canada cure times;”>The Tribune published on 30th September these words as having come from Branville McCartney, the Leader of the DNA, about the alleged failure of the Minister of Tourism Obie Wlchcombe to respond to e mails from Carnival Cruise Lines: 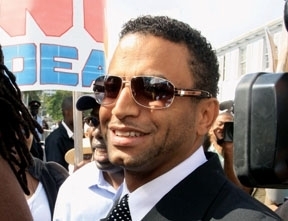 Mr. McCartney showed copies of these emails to the media yesterday, which expressed the cruise official’s interest in talking to Mr. Wilchcombe about the country’s crime issues.

However, when contacted for comment, Mr. de Navarra told The Tribune that while there is some concern with the number of crime alerts being posted by foreign governments to their citizens living in or visiting the Bahamas, Carnival has no plans of issuing an alert of their own.

Mr. de Navarra confirmed to The Tribune that he had sent three separate emails to Mr. Wilchcombe, none of which received a response.

When contacted by The Tribune for comment, Mr. Wilchcombe said that he did not receive any of the emails, but did have a phone conversation with Mr. de Navarra yesterday in an effort to clarify the situation.

He said that at no time during that conversation did Mr. de Navarra indicate that a warning would be issued.

At a press conference on Tuesday, Mr. McCartney claimed that Mr. Wilchcombe’s actions will force the cruise line to soon issue a security warning to its passengers, a warning he said would lead to a weakened tourism product.

“We are told that the port where the cruise ships come in has been of grave concern to many of the cruise ships. They are fearful, they are concerned for their passengers coming to this destination,” Mr. McCartney said.

“We are reliably informed that Carnival Cruise Lines intends to issue a separate security advisory this week. The last time that was done was in 2013 and when that was done hardly any tourists left the ships and the country suffered.

“We believe that if Carnival takes this course of action, other cruise lines will follow suit. We are asking the minister of tourism to respond to Carnival. Carnival is one of the largest cruise lines that come to our ports,” the former Bamboo Town MP added. “Their concern is about crime and the fear of crime for their passengers. They have legitimate concerns and I find it strange that the minister has not responded.”