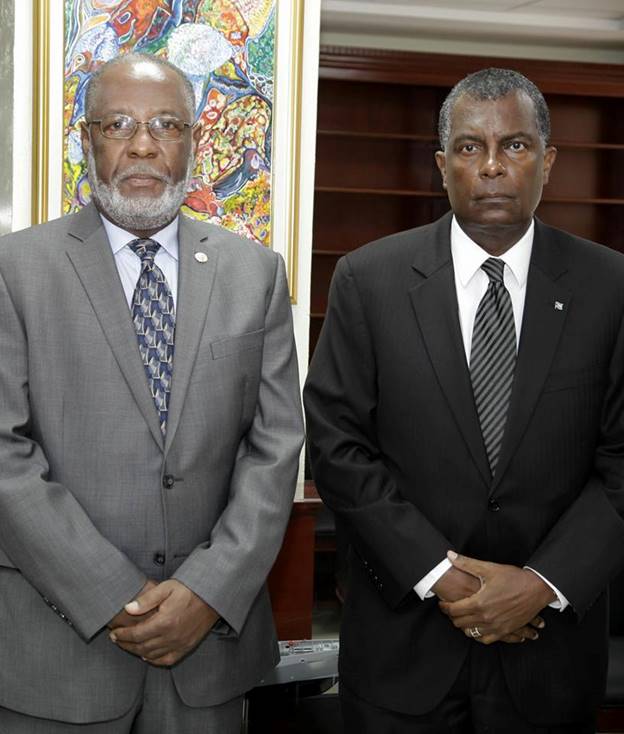 viagra canada times, generic viagra serif;”>Foreign Minister Fred Mitchell with Haitian Ambassador to The Bahamas Jean Victor Geneus at a meeting at the request of the Foreign Minister to seek clarification of remarks made by the The Ambassador to the press on 10 August and the meeting took place on that day.

The following communication was read to the House on 10 August in response to a public statement by Haitian Ambassador Jean Victor Geneus:

Minister for Immigration and also with responsibility

On Comments by the Haitian Ambassador To The Press

I wish to respond to comments attributed in the press today to the Haitian Ambassador in which inter alia the following allegations were made:

That the Department of Immigration is engaged in profiling Haitians in The Bahamas and singling them out for discriminatory treatment;

That the policies of The Bahamas require those who are born here and applying for a Belonger’s Permit are required to return home to apply.

That there are 2000 outstanding application for Belonger’s Permits that are unresolved;

That two children were being repatriated who were not connected to any adult in Haiti;

That in the nine months he has been in The Bahamas he has not had a formal meeting with regard to immigration matters;

That the immigration issue has not been solved by the policy of the Government dated 1st November.

There were a number of public policy suggestions that he thought would solve the problem.

This morning I asked the Ambassador to attend a meeting with myself and officials of the Ministry of Foreign Affairs.

I told the Ambassador that I could not allow those allegations to stand.

They are all materially incorrect.

There is no requirement for people applying for the Belonger’s Permit to do so outside the country. This policy applies to work permits for first time applicants.

I also indicated that one would expect that in relations between friendly countries no such statement should properly be made which takes the other by surprise.

The Ministry of Foreign Affairs has advised me that there is no record of a request for any meeting by the Embassy on this matter since the Ambassador’s tenure.

The three children about whom the Ambassador was concerned, who are being sent back to Haiti came to this country in a boat with an adult who they described as their uncle. They were interdicted in Exuma on 12 July and are being sent back with the adult with which they came. A fourth child arrived in Exuma on 4 August and will be returned with an adult that the child identified as a cousin. We cannot allow a trend to develop of sending young unaccompanied children here with the suggestion that The Bahamas is open to this violation of our laws.

There are 598 applications for Belonger’s permits and 338 have been processed.

The meeting ended I hope with an understanding that going forward there will be the usual mutually respectful relations in the spirit of comity which we have come to expect.

Mr. Speaker, I took time to reaffirm that the policy announced and that came into effect on 1st November remains firmly in place and I sought the assurance of the Ambassador that the Embassy will encourage its citizens to comply with the laws of The Bahamas.

In particular, I reiterated that all students need to get a permit to reside to live lawfully in The Bahamas.

That all who are born here to non-national parents should obtain the passport of their nationality and a permit to reside.

I thanked the Ambassador for his understanding of the migration issues in this country and the understanding that we will be relentless in seeking to prevent irregular migration to The Bahamas no matter the source country.

I also wish to respond to a letter in today’s press from one Abraham Moss seeking “clarity” he says from me on the citizenship laws of The Bahamas and accusing me of changing the laws on citizenship.

That is not a change of the law. The constitution of The Bahamas says that a child born to a single woman carries the Bahamian citizenship of the mother if the mother is Bahamian. So the child will not be Bahamian if her mother is not Bahamian and this often turns on whether the grandmother is Bahamian. That is the constitutional position. It also applies in the case of married women as well.

Mr. Moss also quarrels with a charge for the plastic permanent residence card. The individual is free to carry the paper certificate around but it is quite bulky so the Department now has a plastic credit card sized card which costs 25 dollars with a processing fee of 100 dollars.

As usual I make this statement to the best of my knowledge, information and belief and as I am advised.