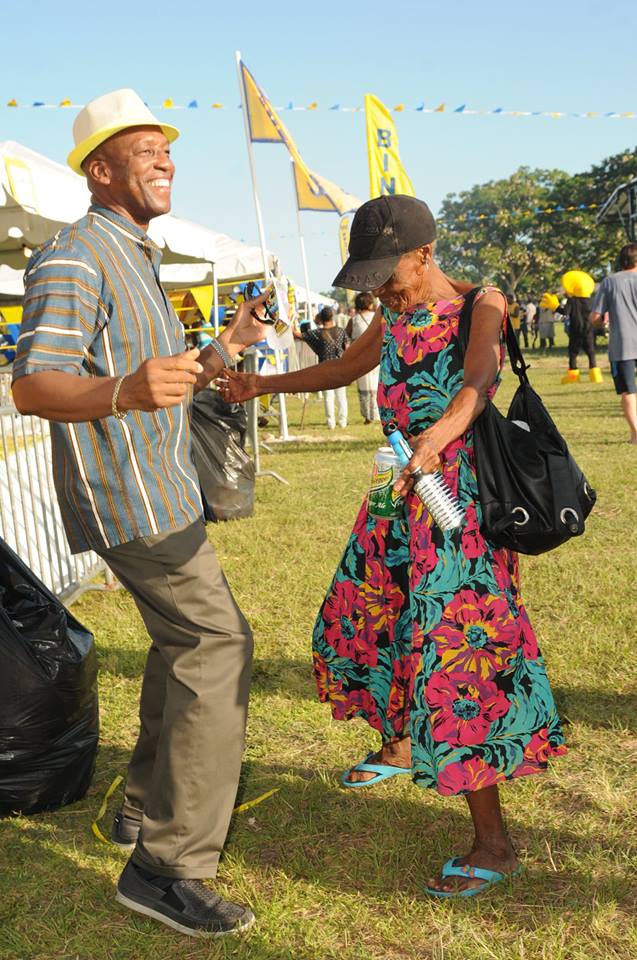 The photo was taken on 6th August at the PLP Fair.  The next day Mr. Sears announced he is going to run for Leader of the PLP at the next Convention:

“I pledge to bring visionary, transformative, ethical, accountable and transparent governance as well as community, business and public service experience anchored in servant leadership to office”.

“I am both pleased and honored to announce my intention to stand as a candidate for the position of leader of the Progressive Liberal Party in the upcoming PLP Convention scheduled for November 2016. I have notified the leadership of the Party, the PLP Fort Charlotte Branch and the PLP Parliamentary Caucus of this intention to stand as a candidate in service to my Party and by extension the Bahamian people.

I hold fast to the fundamental philosophy, ideology and principles upon which the Progressive Liberal Party was founded, based on the Core Values of the PLP, published on October 26, 1953: ‘The Government is the servant of the people and not the people the servant of the government. Government must be administered economically and effectively and must constantly strive to raise the standard of living of the people.’ Let us make servant leadership matter.

I encourage PLPs and Bahamians from all walks of life to join us, as we recommit ourselves to the principles upon which our great party was founded. I encourage us to be both progressive and liberal in our political and social work, which helped usher in Majority Rule, expanded the middle class through education, expanded Bahamian ownership, increased professional and entrepreneurial opportunities and established a secure social security system and protection of our citizens within and outside our borders. Today, we have new challenges, which require that we diversify our economy beyond tourism and financial services. We must draw on the creative imagination of Bahamians and provide more opportunities for Bahamian ownership and entrepreneurship in order to improve our global competitive position. We must inspire and provide a larger platform for young Bahamians to build a robust cultural industry and expand the productive base of our economy”

Sears’ involvement in public service which began as a youth leader of the Interdenominational Christian Youth Association, Youth With TheTruth and the Baptist Youth Association at Bethel Baptist Church, is complemented by his experience in government at the executive level in Cabinet and 10 years in Parliament. He credits his two consecutive elections to Parliament to the extraordinary work and talent of the team in Fort Charlotte, the overwhelming support of constituents of all persuasions and his family. “During my tenure as a Member of Parliament, Attorney General and Minister of Education, Science & Technology, I learned the complexities of governance in our society, the challenges in addressing the concerns of working class Bahamians. Further, I gained a deep appreciation of the urgent need to reform our governance process, better incentivize Bahamian entrepreneurship and extend private public partnerships. Moreover, it became very apparent to me that true servant leadership and a paradigm shift are needed to ensure greater transparency and efficiency in government in order to achieve an improved quality of life for Bahamians and residents within our Commonwealth.”

Sears’ public and international service include serving as Chairman of the Caribbean Action Task Force in 2003, his deployment as a member of the Technical Experts Group for the African Union’s Diaspora Initiative between 2010 and 2012 and as a Commonwealth Observer to monitor the Parliamentary Elections in Trinidad & Tobago of September 2015, with other Commonwealth representatives.

In his capacity as Attorney General, Sears led the effort that resulted in The Bahamas being removed from the Monitoring List of the Financial Action Task Force in October 2005. As Education Minister, Sears increased the stock of classrooms by 385, doubled the number of pre-schools, commenced the construction of two state of the art schools, established the Bahamas Learning Channel, the National Arts and Craft After-School Enrichment Program, National After-School Program for Primary Schools and the National Commission on Special Education, initiated the move to university status for the College of The Bahamas and established the Education Loan Committee and the Education Loan Authority, amongst many other progressive initiatives.

Regarding the current state of the nation, Sears indicated, “The issues before us continue to be restoring our economy with specific focus on job creation, expanding entrepreneurial opportunities for Bahamians and ensuring economic diversification, instituting fiscal responsibility and prudence in governance, combatting crime within our borders and establishing a system of transparent and accountable governance among many other progressive reforms”.

This campaign will present a transformative vision for the Progressive Liberal Party and The Bahamas. The campaign will not make any personal and negative attacks on anyone. Within the coming weeks, Sears will release his platform entitled “A Vision for Our Revolution” to the Party, the general public and the media manifesting the conviction to recommit and adhere to the founding progressive and liberal principles of the Progressive Liberal Party. Sears stated, “I am confident that “A Vision for Our Revolution for The Bahamas” will shift the paradigm and position our country and people toward a sustainable development path”.

Sears is married to Marion. He is the father of three children, one son and two daughters, Adelaja, Ife and Nia.

For more information on Alfred M. Sears and on how to join Our Revolution, please visit our Facebook page and follow us on Twitter andInstagram @AlfredSears.