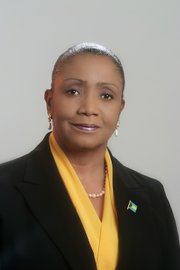 Parliamentary Secretary Cleola Hamilton speaking in the House of Assembly attacked Richard Lightbourn, FNM MP, for his comments about mandatorily tying the tubes of women and that of Duane Sands, the FNM Senator for saying abortion should be part of the crime fighting strategy. She accused the FNM of misogyny. She also called out the Women’s Crisis Centre, the Church and the Human Rights Association for their failure to condemn Mr. Ligthbourn. Within days they all came scrambling to their own defence. Here is in part what she said to the House:

“No matter how the FNM tries to distance themselves from the member’s comments, if there was not a public outcry, as in the case of Duane Sands, there would have been a movement in this direction by the opposition, which demonstrates the thoughts of all of them.

“What I find ironic is that the member’s statement came soon after the gender equality referendum in the Bahamas,” she said, referring to the failed June 7 vote to remove gender inequalities from the Constitution.

“A woman can have one pregnancy from 40 weeks to 9 months and one man can have a baby every 30 minutes if he so desires but there was no mention of vasectomy for men, but there was tying tubes for women. Mr Speaker, it stands to reason whether he truly thinks women are inferior.

“I am concerned that there was no outcry from the Christian Council, the ‘vote no’ pastors or the Crisis Centre. Where is the Grand Bahama Human Rights Association who works so hard for Save the Bays, but cannot find a voice to save the future generation of this nation?

“I cry shame on every last one of them and I congratulate the organisations who spoke up publicly. On behalf of my daughter and women of this nation, we hear your apology and I hope in time we can offer acceptance.”