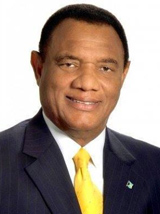 NASSAU, The Bahamas – Prime Minister and Minister of Finance the Rt. Hon. Perry Christie stated on Tuesday that Fox Hill is poised for further community development through “expansion and remediation” of the Community Centre.

He announced at the Fox Hill Day Service at St. Paul’s Baptist Church that the Inter-American Development Bank, through a grant occasioned by Minister of National Security the Hon. Dr. Bernard Nottage, has made provision for a further improvement of the centre, which, he added “is to serve the community – to serve the children and adults in the community.”

Also announced that day was the latest update on the land for the building of a Junkanoo “shack” for the Fox Hill Congos group.

Prime Minister Christie also said that he wanted to use the opportunity to pay tribute to all of the “fallen warriors” who have died.

“Officials in the Fox Hill branch who would be here, and give donations symbolic of the work of the branch in the community; the other warriors who were in the politics of Fox Hill, who have passed to their ‘eternal reward’ — Lionel Davis, Frank Edgecombe, for example, all of the religious leaders who have given much to make Fox Hill what it is today — I just simply want to pay tribute to them for the important role they played on the journey, during the journey, in being major contributors to the wellbeing of the Fox Hill community and the wellbeing of the Commonwealth of The Bahamas,” Prime Minister Christie added.