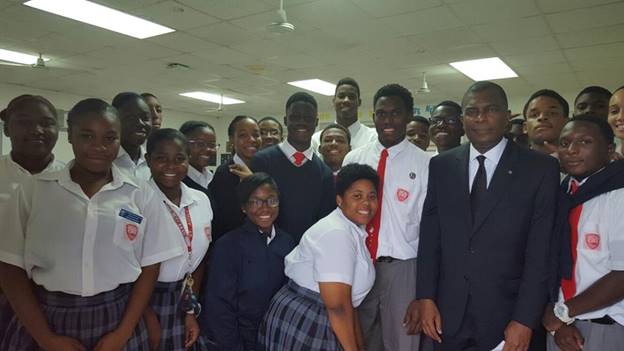 clinic times;”>Visiting the St Augustine’s Group 63 following the stabbing death of a 16 year older by another 16 year older at the Doris Johnson High school just down the road on Wednesday 9th December.

advice times;”>On Wednesday 9 November, all hell broke loose outside the Doris Johnson High School that serves the Fox Hill constituency.  Once more in the midst of the Christmas season when there should be joy over the birth of Christ, the children of the country acting out like  the characters in Lord of Flies took to the street  and the end was death, murder and destruction.

In the end, one boy was dead at 16 years of age.  Three other boys of similar age are in custody.  All of the children: the victims, the murderers are from Fox Hill.

The country’s Prime Minister said he is stunned by it.  The country itself seemed taken by surprise.

When you go back and examine what happens on a daily basis in our schools, however, it is clear that those who are surprised have been walking around with blinkers on.  The public schools of The Bahamas are often a war zone.  Teachers  often live in fear every day for their safety and lives.

One teacher decided to resign from his post in Abaco because he was threatened by a student and his family and no one in authority could do anything to stop it.

The Headmaster of the Doris Johnson School tells how they dismissed the school.  How they dispersed the crowds that had gathered. How they divided the school. They thought they had it contained.  But outside the gates, the children massed again, and a fight which was recorded on video the day before the murder was acted out in front of a commercial store some yards down from the school.  The headmaster ran the perimeter road and was cutting behinds with his cane to get the students broken up. Unfortunately, the one that led to the stabbing he did not get to in time.  He is broken by the experience.  He was there when he saw the last breath of the student.

The school says that after the death many students came up and said how this had been brewing for days.  No one came forward before.  Some students stayed away or asked to take their exams in other place because they knew a fight was coming.  No one told the school.  The dead boy did not tell his mother that he felt threatened.  The murderers’ parents are at a loss themselves; they do not know what to do.

This is the situation in The Bahamas, in New Providence every day and as the school year gets closer to the end it gets worse.

The school is now asking for magnetometers to see if they can stop the weapons and cell phones from coming in.

The irony is that the students are not supposed to have cell phones.  But thank God they violated that rule this time because we would not have been able to actually capture the murder on tape.

The result is that a country is traumatized. Families are ruined and grieving.  But in this country in a few days, it will all be forgotten and that will be the end of that.

Fred Mitchell MP for Fox Hill visited all the schools on Friday 11 December to hear for himself the pathologies that the community faces.  What do we do he thought?   He told the students at St Augustine’s, the nearby Catholic and therefore private school who were  sad to be traumatized by all the images that no one blames them as a generation.  They should not see things that way.  Each individual has to accept responsibility for their own decisions.  Those who stabbed the boy and killed him are responsible for his death, not the generation of young people. In the meantime we soldier on.  Get the best education they can, eh said  and continue to do the things that make for peace and build up the common life.