MITCHELL IN ATLANA ON GOODWILL VISIT 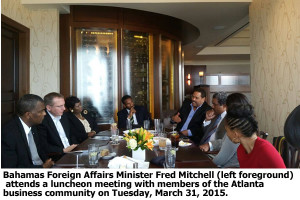 ATLANTA, Georgia (March 31) – Bahamas Minister of Foreign of Affairs Fred Mitchell visited the Bahamas consulate in Atlanta and took time to meet with the political leadership and members of the Atlanta business community. Mitchell was on the return leg of his trip to the United Nations in New York to participate in the high-level dialogue of the Economic and Social Council of the UN. 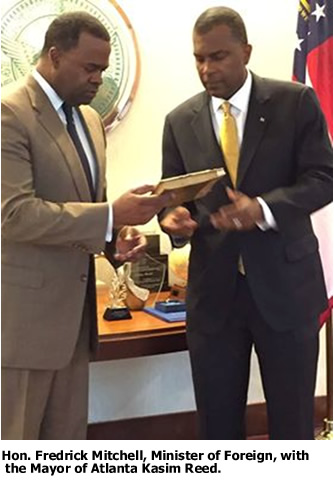 Also in attendance were Tim Waddell, the Development Manager for Popeye’s fast food chains, who is a key player in the company’s expansion into The Bahamas and the Bahamas Popeye’s Bowl. Rounding out the list of luncheon attendees were representatives of The Bahamas Consulate General’s Office of Atlanta, Consul General Randy E. Rolle and Deputy Consul Monique Vanderpool. 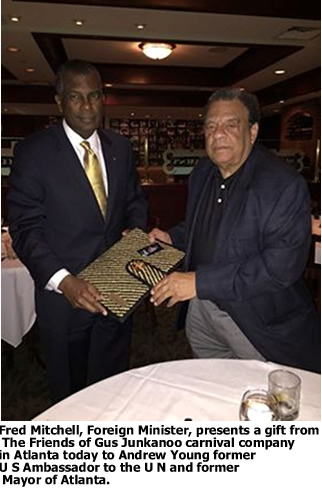 “Atlanta is the heart and center of government, business and social trends when it comes to the southeast United States,” said Rashida Winfrey. “We’re already seeking to have an expanded conversation and even go down to The Bahamas to see first-hand how we can positively impact folks. There is so much we can do when it comes to partnerships in education, principal industries, agriculture and more.”

Consul General Rolle noted that Minister Mitchell’s “visit gave us the opportunity at our office to introduce him to those we have developed an amicable partnership with as well as those who seek to network, invest and collaborate with The Bahamas and Bahamians.”

“Overall, the luncheon proved a great occasion for us to exchange ideas and gave us an opportunity to further converse with leaders in the City of Atlanta and The Bahamas,” Consul General Rolle said.