Mugabe Is Out In Zimbabwe 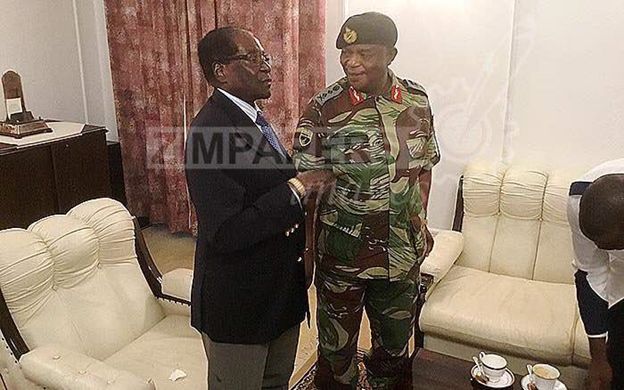 How army takeover was executed

November 17, 2017 in News, Politics
ZIMBABWE Defence Forces (ZDF) Commander General Constantino Chiwenga survived an attempted arrest by Zimbabwe Republic Police Support Unit on his arrival from China at the Robert Mugabe International Airport on Sunday, triggering a chain of events which led to the military effecting what has been termed a soft coup.

According to sources close to the developments, a team from the police’s Support Unit attempted to arrest Chiwenga upon his arrival, but were stopped in their tracks by soldiers who had been deployed by the military to shield the army boss from being apprehended.

The arrest was part of a plan to weed out former vice-president Emmerson Mnangagwa’s backers.

“The political fallout escalated when the police were given instructions to arrest Chiwenga on arrival at the airport. A team was deployed to arrest him, but Chiwenga had been informed of the plan by military intelligence,” an official said.

“The military contemplated landing in Lusaka and driving from Zambia to avoid arrest, among other options, before eventually settling on flying straight into Harare.

“When Chiwenga came, a team of soldiers dressed in National Handling Service (NHS) uniforms got inside the airport, while police positioned themselves to seize him. The soldiers reacted and disarmed them. The soldiers took off the NHS uniforms, revealing their camouflage fatigues, resulting in the police officers fleeing.”

On Monday, Chiwenga then held a press conference at the army’s KG VI headquarters in Harare warning the military could “step in” to avert a potential crisis caused by infighting in Zanu PF.

Chiwenga ordered Mugabe “to stop reckless utterances by politicians from the ruling party denigrating the military” and halt the purging of people with a liberation background in Zanu PF.

He called for “counter-revolutionary elements” in the party to be fished out and for the Zanu PF leadership to ensure that members go for the extraordinary congress with an equal opportunity.

On Tuesday, Zanu PF youth leader Kudzanai Chipanga attacked Chiwenga, labelling him a “rebel” and “criminal” who should be held accountable for the country’s missing diamond revenue.

Zanu PF spokesperson Simon Khaya Moyo later issued a statement describing Chiwenga’s utterances as “treasonous”.
The military responded by moving equipment including tanks into Harare after which it secured strategic places such as the Munhumutapa Building, which houses the President and his deputies’ offices, Supreme Court, Parliament and ZBC.

The army advanced to Mugabe’s residence at around 10:30pm on Tuesday night before descending on key G40 faction members between 2am and 2:30am on Wednesday morning.

They later sought refuge at Mugabe’s house in Borrowdale.

It is not clear if police boss Augustine Chihuri has been seized.

The military also raided Chikurubi Support Unit base, where they took control of the police armoury.

“We wish to assure the nation that His Excellency, the President Robert Gabriel Mugabe and his family are safe and sound and their security is guaranteed. We are only targeting criminals around him who are committing crimes… that are causing social and economic suffering in the country. As soon as we have accomplished our mission, we expect that the situation will return to normalcy,” Moyo said.