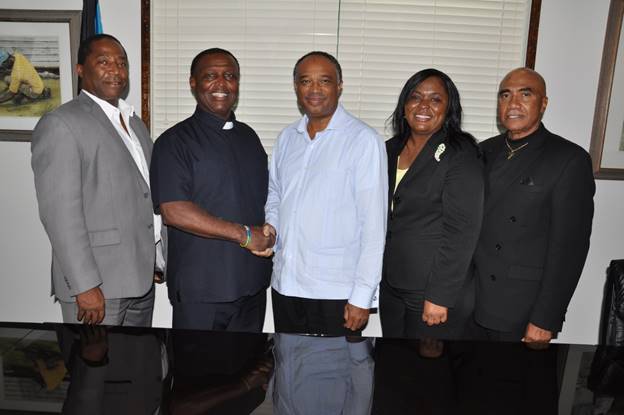 FREEPORT, Grand Bahama – The Reverend Canon Sebastian Campbell, Chairperson of the National Heroes Committee along with Fred Munnings was in Grand Bahama Thursday seeking input on matters relating to the National Honours Bill 2015.

Also travelling with Canon Campbell was David L. Forbes, Secretary of the National Honours Committee. The group was in Grand Bahama Thursday for a town meeting at Christ The King Parish auditorium to discuss the proposed National Honours Bill 2015.

Canon Campbell explained that he is part of a committee selected to educate and inform the public on the National Honours Bill tabled in Parliament by Prime Minister the Right Hon. Perry Gladstone Christie on November 11th 2015.

He explained that their job is not just to inform but to seek ideas from the wider community as to how the Bill should finally look.

“Right now it is not written in stone and we need the input from the public so at the end of the day we would have a product that is truly Bahamian,” he stated.

He also suggested that persons go on the website,

www.nationalhonours.com, in order to view the Bill, and also offer input on the website.

According to the veteran clergyman “the Prime Minister hopes that everything will be well documented and in place when he makes the Second Reading on the 9th of December in the House of Assembly.”

Also he advised that the New Bill seeks to establish seven societies of honours to replace the current colonial systems of awards and present a product that is truly Bahamian — one that will be administered locally by an advisory committee.

It was pointed out that a number of countries in the region such as Jamaica, Trinidad and Barbados have their homegrown system that is well entrenched.

He said that the initiative helps in defining our Bahamian identity with all its uniqueness and that it should be seen and accepted as a package which includes: National Heroes Park, National Dress, Bahamian History Month, National Heroes Day, Majority Rule Day, and Randol Fawkes Labour Day.

Canon Campbell says they are also eyeing the teaching of Afro Bahamian History as mandatory in all our schools, all the way to the College of The Bahamas.

Currently, there are some seven Societies of Honours and Awards up for discussion.

1. The Order of National Hero

2. The Order of The Nation

3. The Order of The Bahamas

4. The Order of Excellence

5. The Order of Distinction

6. The Order of Merit

7. The Order of the Lignum Vitae

He explained that the current plan is for the “Order of National Hero” to be conferred upon a person during his lifetime or posthumously, and that the number of persons receiving that award will be small, and will be the rarest of the rare and the greatest of the great. The person would have the title ‘Rt. Excellent’ before his or her name.

The “Order of the Nation” is to be reserved for and bestowed upon all persons who have served as Governor General and Prime Minister of the Commonwealth of The Bahamas. It is proposed that the letter “O.N.” is placed after the name. Also they would have the title, ‘Rt. Honourable’ before the name.

The “Order of The Bahamas” will in effect be the second largest order for the people at large and will attract persons who have made extraordinary contributions in such areas as: education, Health Services, Agriculture and Fisheries, Religion, Sports, Music and Entertainment, Public service, Law Enforcement, Hospitality Industry, Community Service, Youth Development and Family Island Development. It is being considered that the letters “O.B.” be placed after the name, and ‘Most Honourable’ before the name.

The “Order of Excellence” (O.E) is to be awarded in given categories such as Education, Public Service etc. Those persons will have the title ‘Honourable’ before the name.

The “Order of Distinction” (O.D.) also will be awarded in given categories such as Education, Health Services, Agriculture and Fisheries, etc.

The “Order of Merit” (O.M.) also will be given in categories such as Education, Health Services, Youth Development, Sports, etc.

The “Order of the Lignum Vitae” is being reserved exclusively for the youth and to be known as the youth award for persons up to 25 years of age.