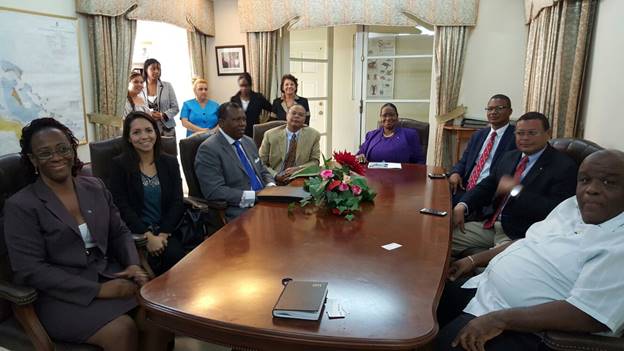 Businessman Alphonso Bowe of the Jet Centre at the Lynden Pindling International Airport  led a delegation of business people to Havana to see into a possible fixed based operation in Havana.  With him was Picewell Forbes MP South Andros and Ambassador for The Bahamas to Caricom.  They paid a call on the Ambassador to Cuba for The Bahamas Alma Adams. 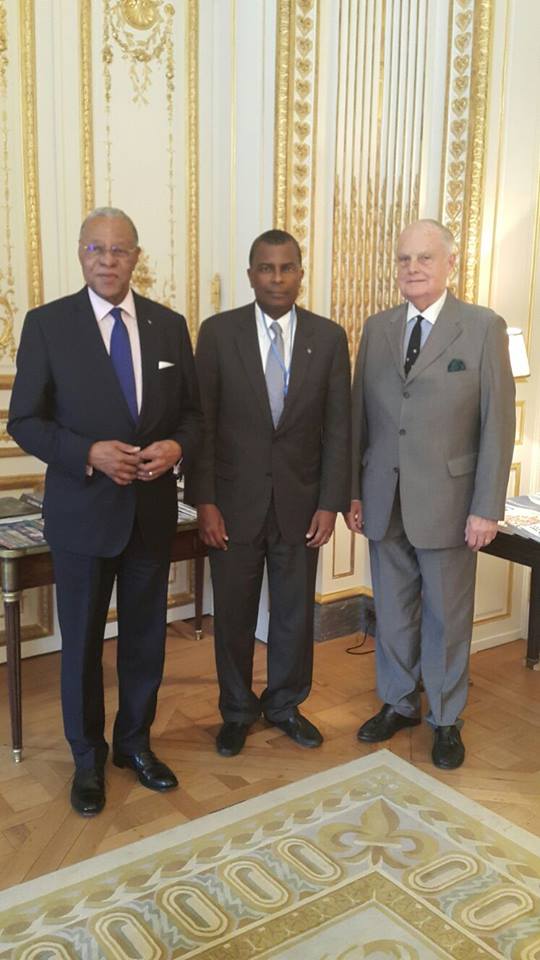 Foreign Minister Fred Mitchell at centre in Paris with the Ambassador to France Ed Bethel and the Honorary Consul for The Bahamas in France Claude le Gris, 1st December. 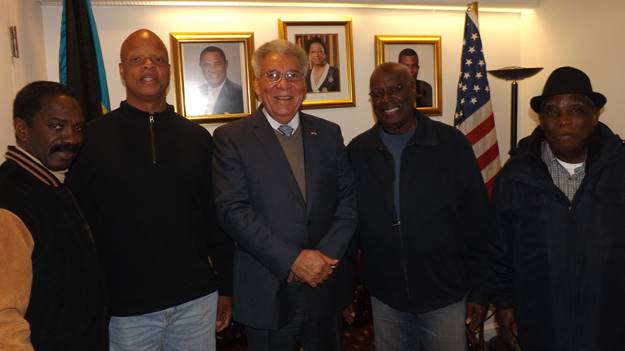 NEW YORK — Mr. Roscoe Davis, a Bahamian national who is Director of Internal Audit at The Ford Foundation, 320 E. 43rd Street, last week hosted an annual pre-thanksgiving luncheon for a group of fellow Bahamian nationals who have been travelling to New York for Thanksgiving for the past thirty years. This annual event was started by Mr. Davis, Greg Bonamy and Bryan Wright, and this year a total of twenty individuals made the trip to New York. Several of them paid a courtesy call on the Hon. Forrester J. Carroll, Bahamas Consul General to New York, on Wednesday, November 25, 2015 at Bahama House, 231 E 46th Street. Pictured from left to right are Mr. Mark Bodie, Mr. Greg Smith, Consul General Carroll, Mr. Kelly Burrows, and Mr. William “Willie Mays” Francis. 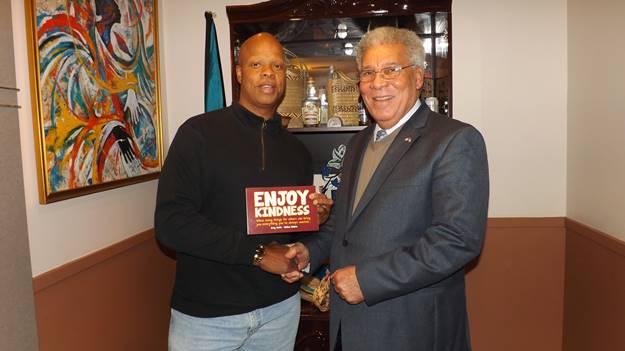 NEW YORK — During his visit to New York last week with a group of Bahamian nationals for their annual Thanksgiving visit to the Big Apple, Mr. Greg Smith (left), author of “Enjoy Kindness,” a book that catalogs philanthropy in The Bahamas, presented several copies of his book to the Hon. Forrester J. Carroll, Bahamas Consul General to New York, during a courtesy call on the Consul General on Wednesday, November 25, 2015 at Bahama House, 231 E 46th Street. 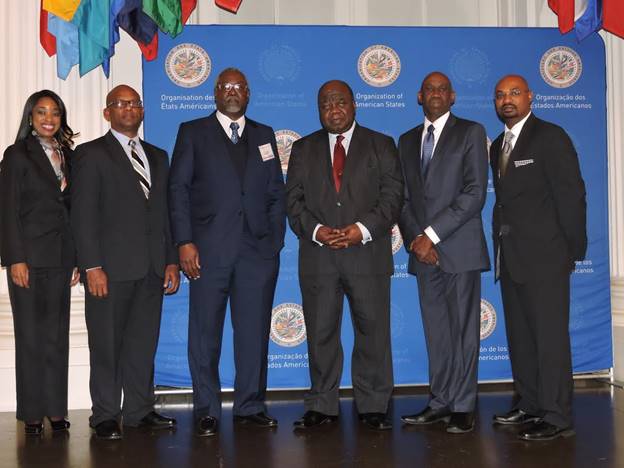 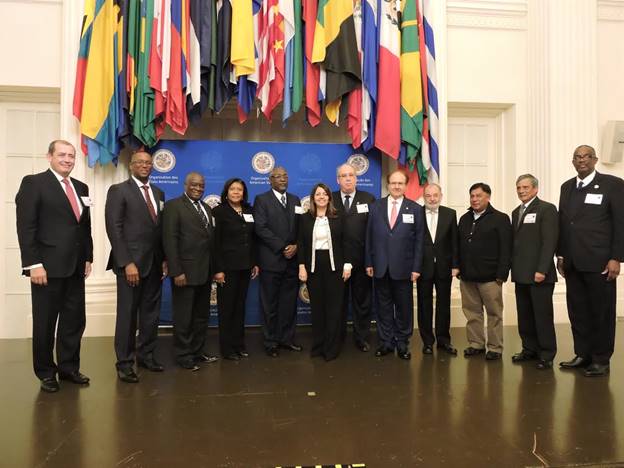 WASHINGTON, D.C. — The Hon. Sir Hartman Longley, Chief Justice of the Commonwealth of The Bahamas, was amongst several Chief Justices and other high-level judicial authorities of the Western Hemisphere invited to participate in the Inter-American Drug Abuse Control Commission’s (CICAD) High Level Dialogue on Alternatives to Incarceration for Drug Related Offenses, held in Washington, D.C., from December 1 -3, 2015.

Since its establishment in 1986, CICAD has served as a hemispheric policy forum for addressing the multifaceted issues and ever evolving challenges surrounding the drug problem in the Americas. In an effort to assist in the ongoing dialogue regarding alternative approaches to incarceration for drug related offenses, CICAD, through the aforementioned High Level Dialogue, sought to bring together OAS Member States to discuss, inter alia, proportionality in sentencing, programs and interventions under judicial review, measures in the administration of justice in drug related cases involving juvenile offenders, social integration for drug offenders, and drug treatment courts for adults and juveniles. Additionally, the High Level Dialogue provided an opportunity for participating delegations to share their respective experiences and models in respect of alternatives to incarceration.

The Bahamas Government assumed the post of Vice Chair of the Inter-American Drug Abuse Control Commission (CICAD) on 11th November, 2015 during the 58th Regular Session of the Commission, in Trujillo, Peru, and remains committed to working in tandem with CICAD and its regional and international partners in the fight against drugs and its residual social and economic effects. 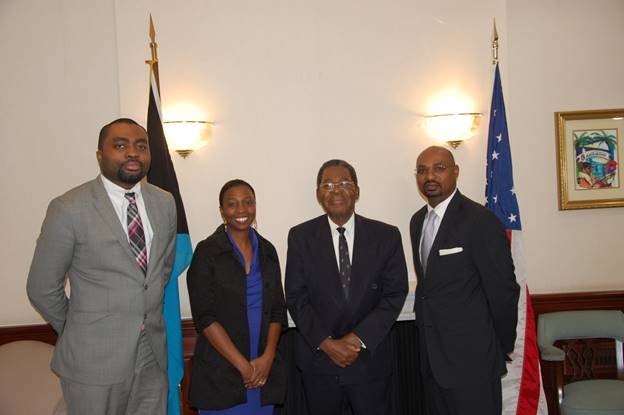 WASHINGTON, D.C. — Sonja Sulcer, founder of Caribbean Innovation Ventures, paid a courtesy call on His Excellency Dr. Eugene Newry, Bahamas Ambassador to the United States, on Thursday, December 3. 2015, at the Bahamas Embassy, 2220 Massachusetts Avenue, N.W.  Mrs. Sulcer, who is a native of Guyana and a graduate of Cornell University, is passionate about inspiring individuals from the Caribbean diaspora to maximize their potential as innovators and entrepreneurs. Caribbean Innovation Ventures’ mission is to inspire entrepreneurs and innovators of all ages in the Caribbean and its goal is to increase the number of Caribbean companies in international markets and promote the value of their products and services. Discussion with the Embassy focused on areas of potential cooperation to enhance opportunities for Bahamian and Caribbean entrepreneurs at home and in the diaspora in the United States. Also participating in the discussion were Mr. Chet Neymour, Deputy Chief of Mission, and Mr. Mikhail Bullard, Third Secretary, Bahamas Embassy. Pictured from left are Mr. Bullard, Mrs. Sulcer, Ambassador Newry, and Mr. Neymour. 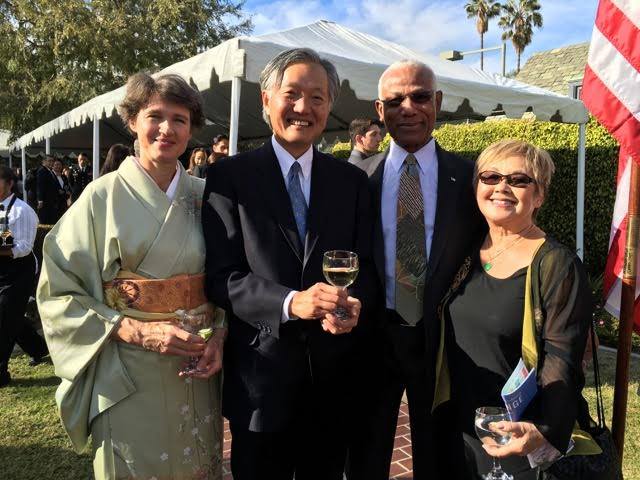 LOS ANGELES — Bahamas Honorary Consul to Los Angeles Cedric Scott and his wife, Mrs. Yuki Morita-Scott, attended the birthday celebration of His Majesty the Emperor of Japan at the residence of Japan’s Consul General to Los Angeles Harry H. Horinouchi on Thursday, December 3. Pictured from left to right in photo number one are Mrs. Horinouchi, Mr. Horinouchi, Mr. Scott and Mrs. Yuki Morita-Scott.