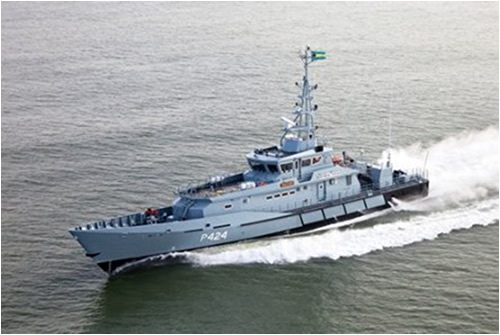 The Stan Patrol 4207s carry a 24-person crew, have a range in excess of 2000 nm and can achieve speeds of 20 knots. As well as their weapons systems each carries two RHIBS for fast interception and boarding. The first 4207, HMBS Arthur Dion Hanna, arrived from the Netherlands in May 2014, followed by HMBS Durward Knowles in July and HMBS Leon Livingstone Smith in September 2014.

As well as the acquisition of a fleet of nine patrol and support vessels of various types, the Sandy Bottom project includes the upgrading of the existing naval base at Coral Harbour plus the construction of two new facilities elsewhere in the Bahamas. The vessel element will include a spares and training package and great emphasis will be placed on skills transfer to ensure the vessels can be maintained and operated by Bahamians. Dutch civil engineering company Van Oord is undertaking the design, engineering, dredging and construction of the three ports for the RBDF, including the deepening of access channels and construction of quay walls, breakwaters, buildings, jetties, moorings and facings.

When complete the new fleet will include a dedicated roll-on, roll-off landing craft (a Damen Stan Lander 5612) which will be fitted with a 25 tonne crane and demountable disaster relief equipment. Special containers will be acquired to provide emergency relief, medical facilities, desalinated water and sanitary equipment which will rapidly be deployed in the event of natural disasters. In addition, four Damen Stan Patrol 3007s Sea Axe type) will join the 4207s to combat drug smuggling, human smuggling and other illegal activities, as well as conduct search and rescue operations.

Of the four 3007 Sea Axe patrol vessels, the first is now nearing completion. The RoRo Damen 5612 is currently under construction at Ha Long in Vietnam. These vessels will be delivered in the coming months with the last due for delivery by summer 2016.