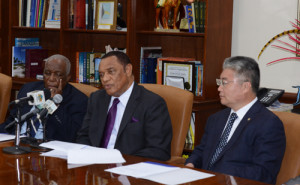 NASSAU, generic cialis The Bahamas – The Bahamas Agriculture and Marine Science Institute (BAMSI) is poised to benefit from a partnership between the Bahamian Government and The People’s Republic of China.

On Wednesday, July 29, a contract signing was held at the Office of the Prime Minister between Ocean University of China (OUC) and the Bahamas Agriculture and Marine Science Institute (BAMSI).

Prime Minister, the Right Hon. Perry G. Christie said that the decision to partner with the university followed a recent trip to China.

“Last January 9th, 2015 when I led a delegation to The People’s Republic of China, the Minister of Foreign Affairs signed on behalf of my government a Memorandum of Understanding between Ocean University of China (OUC) and the Bahamas Agriculture and Marine Science Institute, known as BAMSI,” said Mr. Christie.

“This afternoon we have taken a further step by entering into an agreement of cooperation between these two institutions, OUC and BAMSI, to be signed by the presidents of both institutions. This is an historic advancement for BAMSI which is still in its embryonic stages of development and entering its second year as a tertiary level institution,” he said.

Mr. Christie said that importance of the agreement to OUC is manifested by the fact that a strong delegation of its faculty and staff headed by the president and vice-president of OUC, along with the Ambassador of the Republic of China were present for the contract signing in The Bahamas.

The delegation spent two days in north and central Andros where, in addition to viewing the campus and the infrastructure of the tutorial and commercial farm and the marine facilities, they held important collaborative discussions with the academic arm of the institute.

Marine science cooperation would impact aquaculture — rearing of aquatic animals or the cultivation of aquatic plants for food; mariculture – sea farming via cage fishing of local and new fish species, like cobia; and development of new fish food products for export.

Prime Minister Christie said other areas were also identified for exploration. “In agriculture there was identification of organic fertilizers using seaweed as the raw material,” he said.

“The teams identified a joint venture opportunity between OUC commercial company and the commercial activities of BAMSI in a number of exploratory areas which would enable the transfer of new technologies to both our agriculture and fisheries sub-sectors.”

While in Central Andros, the delegation had the opportunity to see the eco-system of Andros, particularly the blue holes and the bonefish and fly-fishing flats.

Mr. Christie said the agreement would open the door beginning the academic year 2016-2017 for OUC to accept annually students and faculty from BAMSI at the postgraduate level. OUC will assist in obtaining Chinese government scholarships for this arrangement.

“In conjunction, OUC will send students to BAMSI for internship or for the semester abroad program,” He said.

“The agreement will foster academic links through faculty training in workshops; seminars and academic meetings; and the exchange of informative scientific materials and data. Additionally, collaborative research will be one of the high points of cooperation.”