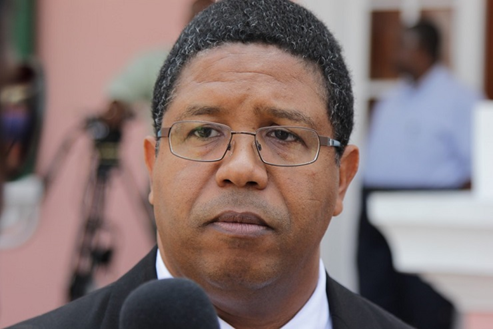 The following statement was issued by the Leader of the Progressive Liberal Party in response to a statement by Peter Turnquest, the Minister of Finance, on the Leader’s claim that the FNM had borrowed 1.7 billion since they came to office and had nothing to show for it:

Peter Turnquest is now like his other colleagues. The last refuge of a scoundrel is to start to make ad hominem attacks instead of responding in policy terms. My response to his attacking me and saying that the PLP should not dare to criticize is to say that no matter how righteously you are indignant, the facts are: two and two still make four and not five.

The facts are the FNM since it came to office borrowed 1.7 billion dollars to date. I simply asked where the money went. His answer was paying off bills from the previous administration. Well are the bills all paid? We know that they are not and we also know that I am convening a meeting of the Public Accounts Committee to find the answer to my question: where did the money go. The first meeting will be convened on Tuesday 10 April.

What the PLP sees is that in exchange for borrowing 1.7 billion dollars the human suffering index in The Bahamas has gone up exponentially. Social services payments cannot be made. The poor can get no relief. The Minister of Health proposes to tax poor people’s food. There is higher unemployment and infrastructural degradation. Mosquitos are out of control. There are no beds for patients. There is no medicine in the hospital. Road traffic accidents are killing our people with no programmes to stop it. Bloody murders every week without fail continue. Our young people are walking with their feet to the US and Canada and the UK because there is no support for them here. This is what we see.

Up in the north of the country, Grand Bahma remains mired in economic malaise. The Government is trying to force an economically questionable, environmentally unsustainable project on the people there.

That is a pretty grim picture. No amount of bombast and personal attacks can change those facts.

We also know that Mr. Turnquest has failed to learn how to be Minister of Finance. He came from being a bean counter in his private business to the sophisticated world of government financing. He did not know the lesson of every head of household in our country that it is not possible to borrow all the money to pay off all the bills. There is such a thing as cash flow management.

The Ministry of Finance’s officials prior to this administration were expert at cash flow management. We are certain that the expertise still resides there but is not being used. Businesses were aware of the Government’s cash flow management practices and understood that the cost of doing business with the government may be a delayed payments but the certainty of those payments made the business acceptable to the private sector and they built into the prices that fact as the cost of doing government business

Now Mr. Turnquest has maxed out the credit of the country on the unwise assumption that the can pay of all bills the government owes. This is a total fallacy. He has fired the people in the Ministry who could have helped him with the problems. He could even have consulted former colleagues who were Ministers of Finance.

Mr. Turnquest is the worst Minister of Finance the country has seen. He has borrowed the breath taking and unmatched sum of 1.7 billion dollars in ten months. Unfortunately for him and for us worse days not better are coming in the near future.