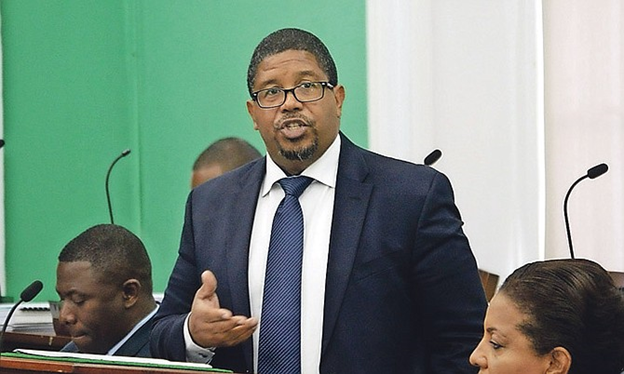 Peter Turnquest, the Minister of Finance, does not know what he is doing as Minister of Finance. He speaks with forked tongue and with a political arrogance that is not justified by the display or lack thereof of his intellect in the present House of Assembly. He is really one of the bad news bears of the Free National Movement, having consistently talked down the economy he is supposed to be defending every day since he has been in office.
The accumulation of sins was made worse by his performance in the House of Assembly on the 4 October.

Mr. Turnquest claimed that the deficit of the country is now 695 million dollars and it was such a high figure because of PLP incompetence. That is a lie. Whatever the deficit is, the number is what it is because of two things: Hurricane Matthew and the change of the accounting method Mr. Turnquest used to calculate what the deficit in fact is. The first is contained in his own budget statement back in May; the second was a sleight of hand that the FNM announced when they decided against advice to seek to pay off the bills they said the PLP left and they wanted to pay them off before the fiscal year ended just so they could say it was he PLP’s fault.

Mr. Turnquest was soon rewarded by the Moody’s ratings agency changing the country’s outlook from stable to negative.

Then Mr. Turnquest said rather startlingly that the Government could not find out where 42 million of the 150 million borrowed for hurricane relief went. He said he wasn’t saying that it was missing but they could not find it.

That is stupid on its face. If you are still looking for it, why would you mention that it’s missing? Mr. Turnquest must think we are fools. Forty two million dollars doesn’t just go missing from the Treasury. This is a clear continuation of the narrative, that the PLP are thieves and rogues and simply walked into the Treasury and took 42 million dollars.

The same officials who worked for the PLP are still there with one exception and that is the man at the top. But Simon Wilson, the ousted Financial Secretary, is still in the country and the former Financial Secretary will gladly show you where it is if you cannot find it.

We make a more general point, however and that is that the country was shut down last year on 5th October. It did not reopen until 9th October. That means for four days there was no revenue collected by the Treasury. Some 200 million dollars of revenue were foregone. Then there was another 200 million of concessions that the Bahamas Government gave up in order to help the country get back on its feet. Where was the money going to come from? We had to go to the market to borrow the money.

How do you do that without busting a hole in the Budget plans? No matter how ambitious. Up to October of last year, the budget was well on track to lower the deficit.

The former Prime Minister suggested that there needed to be a hurricane tax to repay the 150 million dollars. The FNM went ballistic. But how else would it be repaid without exactly the result you now see in the deficit.

Finally, there is no money just sitting in the Treasury for people to simply walk in and steal and certainly not 42 million dollars.

Mr. Turnquest is the incompetent one. He went to his constituency and at a public meeting talked down the economy again. He has no solution to anything, just what the PLP did and what the PLP did not do. Lies, deceit and old story time.

Mr. Turnquest should resign if he doesn’t know how to do his job. His arrogance is insufferable. Arrogance is fine if there is the brain power to back it up but without that, it is simply vanity.