PLP RESPONDS TO THE FNM CHAIRMAN 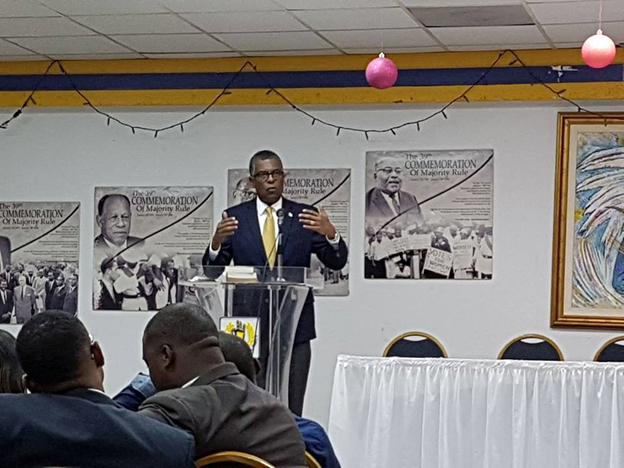 The following statement was issued by Senator Fred Mitchell, Chairman of the PLP in answer to the FNM’s New Year’s assertion that the FNM has set the economy on the right path:

Clearly the Chairman of the FNM is blind deaf and dumb to the suffering inflicted on the Bahamian people since the FNM came to office. His statement of ‘everything is rosy’ is an appalling lack of sensitivity.

The list of FNM missteps includes but is not limited to cutting back on social services to the poor, firing entry level workers in the public service and sending them to the bread lines, jailing their PLP opponents with the FNM’s brand of victor’ s justice and most glaringly of all the FNM have not fixed Grand Bahama. We remind Mr. Culmer of the demonstration led by FNM businessmen in Freeport late last year who said that the economy of Grand Bahama is the worse it has ever been.

We are unsure of the source of FNM Chairman Culmer’s information but his rhetoric and diatribe are typical FNM propaganda, riddled with errors and untruths.

For the record, here are the facts on the economy from official sources: In May of 2012 unemployment stood at 14.7% and had doubled under the governance of the FNM from 2007 and 2012.

During the last term of the PLP, 39,505 jobs were added to the local economy and by May 2017, unemployment was reduced to single digits, 9.9%. Clearly the Bahamas was on the economic rebound long before the FNM came to office. There is evidence, however, that the actions of the FNM government have hurt the country’s economy and international reputation.

According to both Moody’s and Standard and Poor’s, the downgrades the country experienced between 2012 and 2017 were not due to any policy decision of the PLP, but due to multiple hurricanes, the Baha Mar bankruptcy, the poor state of the economy and the country’s deteriorating public finances inherited by the PLP in May 2012. We took the necessary policy actions inclusive of tax reform, the rescue and opening of Baha Mar and implemented the fiscal consolidation plan and a pro-growth strategy. These difficult, tough, unpopular but necessary policy measures proved successful and the PLP government was commended by the IMF and the credit rating agencies for these actions taken.

The PLP government laid a firm and solid foundation of progress on which to build.

ONE GLARING AND IRREFUTABLE FACT IS THAT NOT ONE RELEVANT POLICY MEASURE TAKEN BY THE PLP GOVERNMENT TO RESTORE THIS COUNTRY’S AILING ECONOMY AND DETERIORATING PUBLIC FINANCES WAS REPEALED BYTHE INCOMING FNM GOVERNMENT. THEY ADOPTED THE POLICIES OF THE PLP GOVERNMENT WHOLESALE, INCLUDING VALUE ADDED TAX AND THE FULLY EMBRACED THE NOW OPENED BAHA MAR, ITS NEW OWNERS AND RELISHED THE 5,000 JOBS THIS SUCCESSFUL PROJECT HAS PRODUCED TO DATE.

Mr. Culmer needs to give the political posturing and bluster a rest. His statement is embarrassing for its level of wanton errors and untruths that can be effortlessly debunked with the facts of record. He ought to be ashamed of himself.

The FNM statement lacks credibility and is not worth the paper it is written on.