REMARKS BY BRADLEY B. ROBERTS AT PLP RALLY IN GRAND BAHAMA 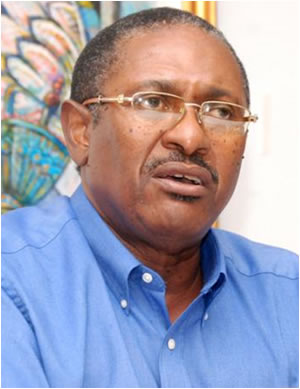 A very good friend told me that Hubert Ingraham told he that the FNM would win all five seats here in Grand Bahama, clearly someone was feeding him fake information base on what I see here tonight. What say yea PLP’s?

It is always a pleasure to be in Grand Bahama, and in particular the Magic City of Freeport, the industrial capital of The Bahamas.

Grand Bahama your PLP government crafted a new vision for this Island that started with the extension of duty free concessions for businesses in communities east and west of Freeport, effectively leveling the economic playing field. That move represents change and progress.

The changes to the Hawkbill Creek Deep Water Harbour Act and the Investment Incentive Act also represents change and progress.

New ownership in the major hotel properties will bring the major change need by Grand Bahama to move all of our people forward together.

You would not get that king of change and progress with Minnis and the FNM. They are opposed to a new and fresh vision for Freeport and Grand Bahama.

For a party that is hanging its election fortunes on change, their actions tell a totally different story. They are opposing the big changes for progress that the PLP is bringing to Grand Bahama. They are hell bend on maintaining the status quo under Minnis.

Under his leadership, seven MP’s, six Senators and two National Chairmen and three candidates abandoned him. Some said they lacked confidence in his leadership; some said he was dishonest and not a man of his word and therefore could not be trusted and some have called him corrupt.

It is no secret that he struggled to keep his party together and I am advised that the infighting continues regardless of the amount of lipstick they try to put on that pig.

How a leader of a political party leads and manages his party’s affairs is a dress rehearsal for how he would lead a government. The verdict among Bahamians is that he is a failed leader.

This brings me to Minnis selected candidates. Howard Rickey Mackey in North Eleuthera is a bad candidate and I will drop some more bombshells after he is nominated; another their Golden Gates candidate Michael Augustine Foulkes suspension to practice Law in the USA strongly conveys that he is an unfit candidate.

Michael Pintard is another bad and unfit candidate, we can see through Michael Pintard, it is inexplicable, disrespectful and arrogant that Michael Pintard could pass the flimsiest of vetting systems to become a candidate for high office. If Pintard was forced to resign in disgrace from the Senate and as FNM National Chairman, then what makes him suitable for the House of Assembly??

He was involved in the middle of a murder for hire plot where he was heard on tape agreeing to pay men who Minnis described as criminals in exchange for signing some affidavit. He claimed that he knew of a murder conspiracy but never reported the conspiracy to the police. He allegedly met with the murderers and bribed them? The whole sordid affair stinks to high heaven.

Can anyone tell me where is Pintard working? Who is providing him the monies he is throwing around and building a big new house am told out of his pocket? Some say he is on the payroll of Save the Bay and loose lip Fred Smith? Something is stink in Denmark and it is not the cheese Ladies and gentlemen.

When the FNM talks about it being “the people’s time” we know just who “people” they mean!

And these people know how weak of a leader, Minnis is. Brent Symonette and his boys, D’Aguilar, Marvin Dames, Jeff Lloyd and others under the spell of Sarkis, and of course Save the Bays, have all said to themselves, if Loretta could dislodge Minnis, so can they. Be careful Grand Bahama. A vote for Minnis and the FNM, is a vote for a nightmare waiting to happen.

The Candidates selections of the FNM strikes at the foundation of the quality of any successful leader and that is the attribute of judgment.

Minnis I remind you was ambushed and removed as the official opposition leader because of poor judgment.

My brothers and sisters:

I am delighted to fully endorse our wonderful Grand Bahama team of Obie Wilchcombe Mr. Tourism for West Grand Bahama and Bimini, Dr. Michael Darville the man who gets the job done for Pineridge, Julian Russell faithful and loyal for Central Grand Bahama, honest and hardworking Norris Bain for Marco City and Rev. Preston Cooper Jr the people choice for East Grand Bahama.

They are all accomplished and have strong track records as community leaders and that is very important to be a successful Member of Parliament.

I ask you to join their campaign; go door to door with them; organize constituency events with them; and invite your family and friends to vote for them.

So on Election Day, mark your “X” next to the hand.

PrevPreviousTHE PLP SPEADS FALSE NEWS ON ITSLEF
NextPALM SUNDAY IN NASSAU (No bombs. We are at peace)Next