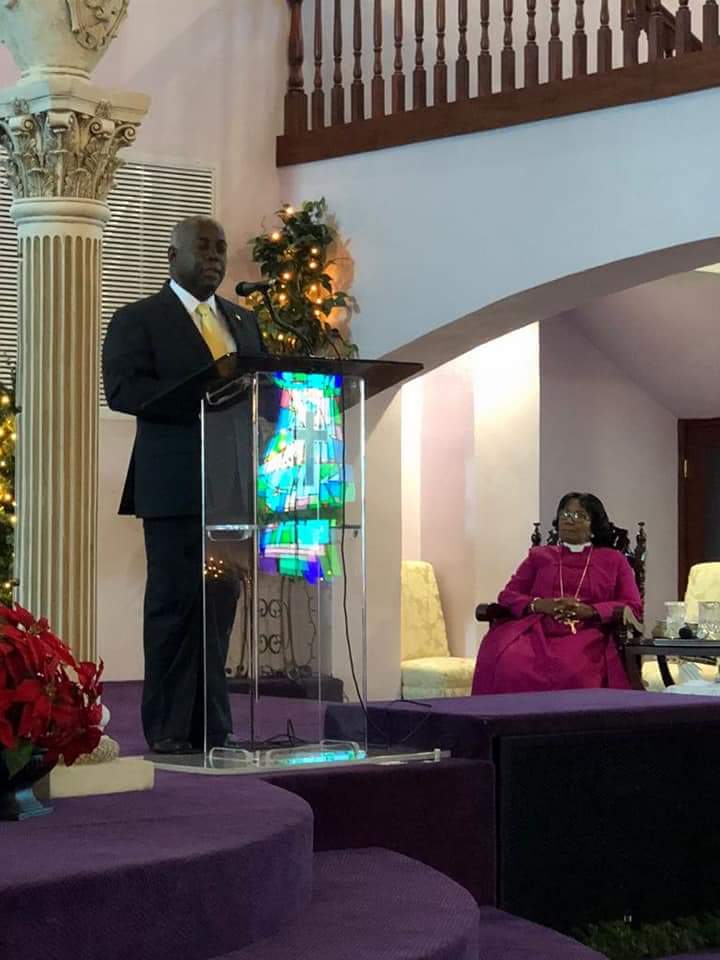 Leader of the Progressive Liberal Party

Rev. Helen McPhee, officers of theProgressive Liberal Party, members of the congregation here at Agape, ladies and gentlemen, boys and girls. Thank you for having us here this morning to mark this special occasion.

Sir Arthur Foulkes, then GovernorGeneral, writing on 8 January 2014 in his message on Majority Rule Day said this:

On the 10th of January 1967 thewill of the majority of Bahamians was freely expressed in a general election based on universal adult suffrage where all adult citizens could vote freely to determine who would govern our country. Majority Rule Day memorializes what was, in a sense, a SecondEmancipation, since that was the day when people of African descent, who made up the majority of the population of The Bahamas, were enabled for the very first time to form the government.

I begin there because it is recognised that Sir Arthur is a Bahamian statesman, long ago having lifted himself from the bounds of partisan politics, and he is able to speak to general national issues. He was a PLP when the struggle for majority rule began and later became an FNM. He was a candidate in that general election. At the time, he was the Editor of the Bahamian Times, the party’s newspaper. It was that paper which proclaimed on the fateful next day after the 10 January that Bay Street’s era had ended.

Who and what was Bay Street? The Bay Street Boys was the name given to the men led by Sir Roland Symonette, the Premier of The Bahamas in 1967 who had essentially run The Bahamas both politically and economically from the turn of the 20th century but had converted themselves into a political party in 1958 called the United Bahamian Party. Their businesses all were situated on Bay Street, along with their homes. The names were Symonette, Sands, Christie, Baker, Kelly, Sawyer, D’Albeanas, Graham, Solomon amongst others. They ran the country from their offices. The Government and their businesses were indistinguishable.

10 January 1967 was a shock on the system for the entire oligarchy. The impossible had happened. Sir Stafford Sands, their real captain, and the Minister of Finance in the United Bahamian Party Government predicted on the eve of the election that “as sure as the sun shall rise” the UBP would be back in power the next morning. The Bahamian people had a different outcome in mind.

Playing to the theme of Exodus,Rev. H. W. Brown of the Bethel Baptist Church reminded the people that the Bible recorded that on the 10th day of the first month, God freed the chosen people of Israel.

The PLP swept into power on thatday. The possibility of change was upon us and change began. Sir Lynden Pindling said to the nation that we must look up and move on because the world was watching.

This was accomplished without bloodshed. There was a peaceful transfer of power.

What did the new government do? They committed themselves to education. So the very first budget of the PLP was made education the highest priority. Just think of it, prior to the 1967 revolution, the Government High School was the only public secondary educational institution in the country. It accepted 25 students per year. You had to pay be a student there. All of that changed with the coming of comprehensive education for all after 1967.

One of the private schools in thecountry was still a racially segregated school. That was the remaining symbol of bye-gone ear which changed in 1968, following the quiet revolution.

Sir Milo Butler who is 1960 hadtaken Sir Lynden Pindling by the hand and into the Royal Bank of Canada to demand that Black people be hired as tellers in the bank could now smile because all of that was possible.

These memories seem all far anddistant but with many around us today who are trying to turn back the tide we have an obligation to remind the young that what we have today did not always exist in the way it does today. These stories must be told and embraced by a new generation so that they become their own.

The PLP has been too tentative about telling its story. Under my leadership, I do not intend for this to continue. I intend to tell who we are and how we came to be where we are. Let us never forget. They tell us that those who forget their history are doomed to repeat it.

I remind today’s government thatthey are where they are because of 10 January 1967.

I look forward to the day when this holiday and these celebrations will be embraced and accepted for what they truly are by all Bahamians. This day belongs not to one party but to all Bahamians.

God bless the Commonwealth Of The Bahamas