Rigby Again In His Own Words 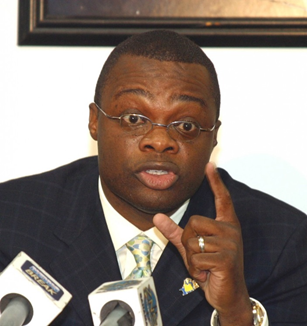 tadalafil cialis times;”>Raynard Rigby spoke to the radio audience via the Jeffery Lloyd Show on    August and indicated he was thinking of putting his name in the race for Chair.  The next day both the newspapers led with the headline.  Anyone can run for Leader of the PLP who is a PLP in good standing.  The practicalities of it are that most times only a Member of Parliament can  lead the party but  anyone can try.  The PLP officially was not pleased with his input.  Here is what he had to say in his own words as reported in The tribune 1st September:

“I’m going to put my name on the list.

“We can’t be talking about building a bridge to the future for the next 20 years,” Mr. Rigby said. “The bridge ought to have been built, got to be ready to be walked on, ran on and travelled on and we have to ensure that we are ready to position the party for the new kind of Bahamian that is upon us.

“There are a group of leaders in our party, and I say leaders in a broad sense, who do not get what the new Bahamas is about. Who don’t understand the degree of suffering and hopelessness that so many are feeling out there, who don’t recognise the level of despair that people are feeling. They are out of depth.”

“Younger members of the PLP are frustrated with the party for not living up to their expectations.

“And that’s why it’s important in the next convention for us to ensure that the party reflects the new Bahamas. The days of marshaling support by those who are pensioners are over. If you look at the demographics of the Bahamas, the people who are going to determine the next election are those between the ages of 18 and 35, maybe 38.

“If the PLP is to win the next election, the party’s leadership must reflect the demographic so that we can reach out to them, talk to them, understand their sufferings and disappointments, make the necessary corrections and lay out a vision and plan which corresponds to what their shared view is of the future of the Bahamas.”